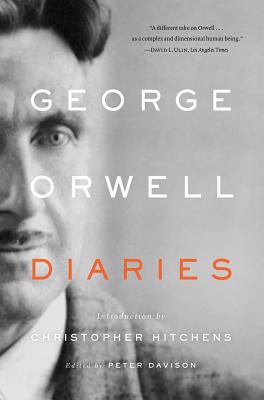 Read with care, George Orwell’s diaries, from the years 1931 to 1949, can greatly enrich our understanding of how Orwell transmuted the raw material of everyday experience into some of his best-known novels and polemics. They furnish us with a more intimate picture of a man who, committed to the struggles of the mechanized and “modern” world, was also drawn by the rhythms of the wild, the rural, and the remote.
— Christopher Hitchens - Vanity Fair

Orwell’s achievement grew out of seemingly modest virtues: decency; good, hard sense; and clean, clear prose. Yet they added up to something monumental… The diaries as a whole do exactly what you would expect: They confirm his greatness.
— Craig Seligman - Bloomberg.com

Reading these diaries leaves one, as always when encountering the words of George Orwell, with a confirmed admiration for the sterling qualities that have made him a benchmark for integrity and a lodestar for writers and thinkers across the ideological spectrum. Embedded in the DNA of his writing is that austere, penetrating analytical ability, averse to cant or any form of hypocrisy and pretension, unsparing of everything and everyone—especially himself. He simply can't help being that way: Once pen is put to paper, or fingers to typewriter, those qualities appear, second nature to his writing, even the most casual.
— Martin Rubin - San Francisco Chronicle

...[T]he diaries as a whole do exactly what you would expect: They confirm his greatness.
— Craig Seligman - Newsday

We should celebrate the publication of Orwell’s diaries. The publication of personal texts by other authors might smack of cheap opportunism, purely a money-making ploy. But I think publishers got it right with Orwell.
— Scott Beauchamp - Book Riot