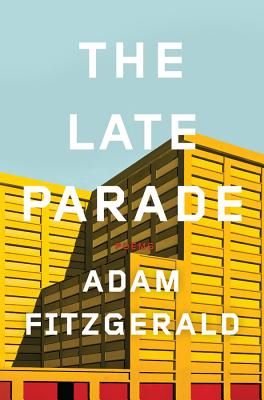 A debut collection that welcomes a new modernist aesthetic for the twenty-first century.

Fitzgerald’s voice is a new and welcome sound in the aviary of contemporary poetry… His is a third way, a poetry that is neither sealed off from human ears nor bent solely on pleasing them. In a word, his poems are drunk on both word and allusion and are therefore doubly tipsy… The result is a poetry as lush as any of Keat’s odes, as textured as a corridor in the Louvre… No wonder this was the first debut collection acquired by W.W. Norton’s resurrected Liveright division, which helped define modernism in America in the 1920s… Reading ‘The Late Parade’ wasn’t like listening to a mountain speak. It was more like listening to the earth laugh.
— David Kirby - New York Times Book Review

In The Late Parade, Adam Fitzgerald is a master of defeating expectations so as to fulfill them farther along. One has the feeling of climbing higher along a path that is giving way under one’s feet, in pursuit always of ‘a waltz on our breath.’ Yet the rhythmic and consonant commotion of these poems ends in joy. This is a dazzling debut.

The Late Parade by Adam Fitzgerald may be the beginning of a great career.

Adam Fitzgerald is the author of The Late Parade and George Washington. New poems have appeared in The New Yorker, Poetry, Granta, Boston Review, the New York Review of Books, and elsewhere. Fitzgerald is contributing editor of Literary Hub, teaches at NYU, and directs The Home School. He lives in New York.
Loading...
or
Not Currently Available for Direct Purchase