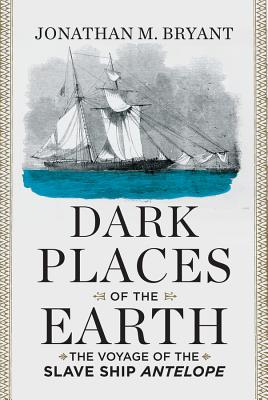 Dark Places of the Earth

The Voyage of the Slave Ship Antelope

A dramatic work of historical detection illuminating one of the most significant—and long forgotten—Supreme Court cases in American history.

In 1820, a suspicious vessel was spotted lingering off the coast of northern Florida, the Spanish slave ship Antelope. Since the United States had outlawed its own participation in the international slave trade more than a decade before, the ship's almost 300 African captives were considered illegal cargo under American laws. But with slavery still a critical part of the American economy, it would eventually fall to the Supreme Court to determine whether or not they were slaves at all, and if so, what should be done with them.

Bryant describes the captives' harrowing voyage through waters rife with pirates and governed by an array of international treaties. By the time the Antelope arrived in Savannah, Georgia, the puzzle of how to determine the captives' fates was inextricably knotted. Set against the backdrop of a city in the grip of both the financial panic of 1819 and the lingering effects of an outbreak of yellow fever, Dark Places of the Earth vividly recounts the eight-year legal conflict that followed, during which time the Antelope's human cargo were mercilessly put to work on the plantations of Georgia, even as their freedom remained in limbo.

When at long last the Supreme Court heard the case, Francis Scott Key, the legendary Georgetown lawyer and author of "The Star Spangled Banner," represented the Antelope captives in an epic courtroom battle that identified the moral and legal implications of slavery for a generation. Four of the six justices who heard the case, including Chief Justice John Marshall, owned slaves. Despite this, Key insisted that "by the law of nature all men are free," and that the captives should by natural law be given their freedom. This argument was rejected. The court failed Key, the captives, and decades of American history, siding with the rights of property over liberty and setting the course of American jurisprudence on these issues for the next thirty-five years. The institution of slavery was given new legal cover, and another brick was laid on the road to the Civil War.

The stakes of the Antelope case hinged on nothing less than the central American conflict of the nineteenth century. Both disquieting and enlightening, Dark Places of the Earth restores the Antelope to its rightful place as one of the most tragic, influential, and unjustly forgotten episodes in American legal history.

Praise For Dark Places of the Earth: The Voyage of the Slave Ship Antelope…

In Bryant’s gripping telling, the moral contradictions of the time are laid bare…. Carefully researched, beautifully crafted, Dark Places—the title comes, ominously but evocatively, from Joseph Conrad’s Heart of Darkness—is one of the very few books that delivers on the promiscuous promise to employ an obscure episode to offer new insights on a well-trod byway of history.

Bryant masterfully narrates the incredible machinations revolving around the eventual case, which would drag on for seven years, and take a considerable toll on the captives awaiting a decision…. Epic in scope, providing rich portraits of life at sea and trade in the Atlantic world, slavery and its hazards in the malaria-ridden South, and the tension between the ethical and financial interests of a slew of chummy Southern gentlemen adjudicating the case, Dark Places of the Earth is an invaluable contribution to the understanding of antebellum America.

An eye-opening account of a little-known (yet horrifying) episode in American history…. In Dark Places of the Earth, Bryant has salvaged the history of an era when black lives mattered to slavers only as profit and the dead were thrown to the sharks.

From its poetic title to its concluding sentence, Dark Places of the Earth spins a riveting yarn, using the vexed voyage of the slave ship Antelope to illuminate a profound moment in American history. Vividly drawn characters and courtroom drama make this narrative history of a high order.

In this fascinating and engagingly written study, Jonathan M. Bryant illuminates a largely forgotten—but highly significant—episode in American legal history. Based on prodigious and meticulous research, Dark Places of the Earth will appeal to general readers and scholars alike. An important, original book.

— Douglas R. Egerton, author of The Wars of Reconstruction: The Brief, Violent History of America's Most Progressive Era

Jonathan Bryant sheds new and revealing light on a dark chapter in the history of American slavery, and on a Supreme Court decision that, despite its faults, deserves to be better known.
— Brian McGinty, author of Lincoln's Greatest Case

A richly documented work that restores the Antelope to its central place in the long, grim history of the Atlantic slave trade.

Detailed and fascinating account…. This is a superb examination of an obscure but important episode in the struggle against slavery.
— Jay Freeman - Booklist, Starred review

[Bryant] meticulously unwinds the years-long, complex legal history that finally led to the case being heard by the six justices of John Marshall's Supreme Court, four of whom were slave owners…. From the West African shores to Georgia, Washington, D.C., and, finally Liberia, Bryant's riveting history of this case and these slaves is a remarkable one.
— Tom Lavoie - Shelf Awareness

Jonathan M. Bryant is professor of history at Georgia Southern University. He specializes in slavery, emancipation, and constitutional law. He lives in Statesboro, Georgia.
Loading...
or
Not Currently Available for Direct Purchase