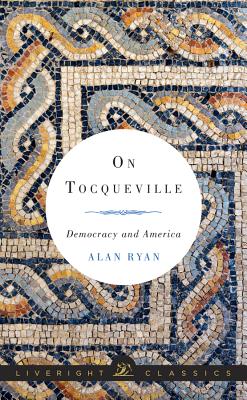 Tocqueville’s gifts as an observer and commentator on American life and democracy are brought to vivid life in this splendid volume.

In On Tocqueville, Alan Ryan brilliantly illuminates the observations of the French sociologist Alexis de Tocqueville, who first journeyed to the United States in 1831 and went on to catalog the unique features of the American social contract in his two-volume masterpiece, Democracy in America. Often thought of as the father of "American Exceptionalism," Tocqueville sought to observe the social conditions of emerging political equality in America, "a river that may be channeled but cannot be stopped in its course." In choosing America, he posed a central question of how a moderate, stable, and constitutional government is to be maintained in the wake of a revolution. As a dispassionate visitor, Tocqueville wanted to discover the social, moral, and economic arrangements that made liberty and self-government possible.


In doing so, Tocqueville made a number of prescient observations about American life—whether it be the contrast between equality and liberty or Americans’ belief that they all belong to the middle class—that remain as relevant today as when they were first written. While Tocqueville is often praised by both conservatives and liberals, either for his distrust of big government and fondness for decentralized power or for his concern with association and community, both tend to overlook his contempt for the “coarse appearance” of the individual members of Congress as well as his enthusiasm for the brutal nature of our prison system. Alan Ryan examines the often complicated and elusive Democracy in America, tracing the influence of writers such as Rousseau, Montesquieu, and Guizot, and explaining Tocqueville’s original conceptions of equality and individualism within their historical context. In Ryan’s hands, On Tocqueville becomes the perfect introduction and guide to Democracy in America.

On Tocqueville: Democracy and America features:

• key excerpts from Democracy in America

Alan Ryan was warden of New College, Oxford University, where he was a professor of political theory. He is the author of John Dewey and the High Tide of American Liberalism, Bertrand Russell: A Political Life, and On Politics: A History of Political Thought from Herodotus to the Present.

Praise For On Tocqueville: Democracy and America (Liveright Classics)…