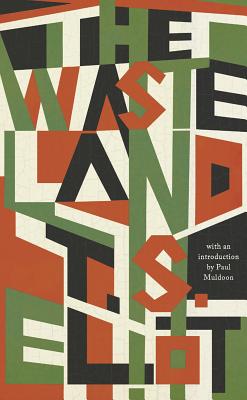 The Waste Land is arguably the most important poem of the twentieth century. First published in the United States by Boni & Liveright in 1922, this landmark reissue of the first edition, now back with its original publisher, includes a new introduction by Paul Muldoon, showcasing the poem's searing power and strange, jarring beauty. With a modernist design that matches the original, this edition allows contemporary readers to experience the poem the way readers would have seen it for the first time.


As Muldoon writes, "It's almost impossible to think of a world in which The Waste Land did not exist. So profound has its influence been not only on twentieth-century poetry but on how we’ve come to view the century as a whole, the poem itself risks being taken for granted." Famously elliptical, wildly allusive, at once transcendent and bleak, The Waste Land defined modernity after the First World War, forever transforming our understanding of ourselves, the broken world we live in, and the literature that was meant to make sense of it. In a voice that is arch, ironic, almost ebullient, and yet world-weary and tragic, T. S. Eliot mixes and remixes, drawing on a cast of ghosts to create a new literature for a new world. In the words of Edmund Wilson, "Eliot…is one of our only authentic poets…[The Waste Land is] one triumph after another."

We know of no other modern poet who can more adequately and movingly reveal to us the inextricable tangle of the sordid and the beautiful that make up life.
— Times Literary Supplement

The Waste Land is unquestionably important, unquestionably brilliant…The poem must be taken—most invitingly offers itself—as a brilliant and kaleidoscopic confusion; as a series of sharp, discrete, slightly related perceptions and feelings, dramatically and lyrically presented, and violently juxtaposed…It shimmers, it suggests, it gives the desired strangeness…One of the most moving and original poems of our time.

[An achievement] of the first importance for English poetry. In it a mind fully alive in the age compels a poetic triumph.
— F. R. Leavis

T. S. Eliot (1888–1965) was one of the fathers of modernism and a defining voice in English-language poetry. He is the author of some of the best known poems in the English language, including "The Love Song of J. Alfred Prufrock," The Waste Land, "Ash Wednesday," and Four Quartets. The leading poet of the modernist avant-garde, Eliot radically reimagined the possibilities for literature in the twentieth century and beyond, and was also renowned as a playwright and as a literary and social critic. Eliot's books of criticism include The Sacred Wood, while his theatrical works include Murder in the Cathedral. He was awarded the Nobel Prize for Literature in 1948.

Paul Muldoon is the author of numerous volumes of poetry, including, most recently, The Word on the Street. He is the poetry editor of The New Yorker and the Howard G. B. Clark '21 Professor in the Humanities at Princeton University. His awards include the Pulitzer Prize for Poetry and the T. S. Eliot Prize.