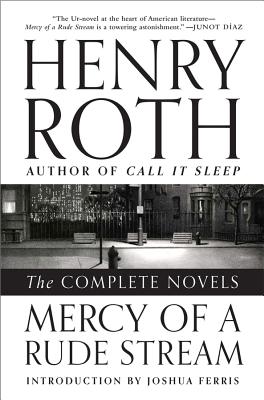 Mercy of a Rude Stream (Hardcover)

This "landmark of the American literary century" (Boston Globe) is finally published as one volume, appearing with a brilliant new introduction.

Sixty years after the publication of his great modernist masterpiece, Call It Sleep, Henry Roth, a retired waterfowl farmer already in his late eighties, shocked the literary world with the announcement that he had written a second novel. It was called, he reported, Mercy of a Rude Stream, the title inspired by Shakespeare, and it followed the travails of one Ira Stigman, whose family had just moved to New York’s Jewish Harlem in that "ominous summer of 1914."


"It is like hearing that…J. D. Salinger is preparing a sequel to The Catcher in the Rye," the New York Times Book Review pronounced, while Vanity Fair extolled Roth's new work as "the literary comeback of the century." Even more astonishing was that Roth had not just written a second novel but a total of four chronologically linked works, all part of Mercy of a Rude Stream. Dying in 1995 at the age of eighty-nine, Roth would not live to see the final two volumes of this tetralogy published, yet the reappearance of Mercy of a Rude Stream, a fulfillment of Roth's wish that these installments appear as one complete volume, allows for a twenty-first-century public to reappraise this late-in-life masterpiece, just as Call it Sleep was rediscovered by a new generation in 1964.

As the story unfolds, we follow the turbulent odyssey of Ira, along with his extended Jewish family, friends, and lovers, from the outbreak of World War I through his fateful decision to move into the Greenwich Village apartment of his muse and older lover, the seductive but ultimately tragic NYU professor Edith Welles. Set in both the fractured world of Jewish Harlem and the bohemian maelstrom of the Village, Mercy of a Rude Stream echoes Nabokov in its portrayal of sexual deviance, and offers a harrowing and relentless family drama amid a grand panorama of New York City in the 1910s and Roaring 20s.

Yet in spite of a plot that is fraught with depictions of menace, violence, and intense self-loathing, Mercy of a Rude Stream also contains a cathartic, even redemptive, overlay as "provocative as anything in the chapters of St. Augustine" (Los Angeles Times), in which an elder Ira, haunted by the sins of his youth, communes with his computer, Ecclesias, as he recalls how his family's traditional piety became corrupted by the inexorable forces of modernity. As Ira finally decides to get "the hell out of Harlem," his Proustian act of recollection frees him from the ravages of old age, and suddenly he is in his prime again, the entire telling of Mercy his final pronouncement.

Mercy of a Rude Stream is that rare work of fiction that creates, through its style and narration, a new form of art. Indeed, the two juxtaposed voices—one of the "little boys swimming in a sea of glory," the other of one of those same boys "in old age being rudely swept to sea"—creates a counterpoint, jarring yet oddly harmonious, that makes this prophetic American work such an lasting statement on the frailties of memory and the essence of human consciousness.

Mercy of a Rude Stream: The Complete Novels includes A Star Shines Over Mt. Morris Park, A Diving Rock on the Hudson, From Bondage, and Requiem for Harlem.

Joshua Ferris is the author of Then We Came to the End and The Unnamed.

Praise For Mercy of a Rude Stream: The Complete Novels…

The Ur-novel at the heart of American literature—Mercy of a Rude Stream is a towering astonishment.

As provocative as anything in the chapters of St. Augustine or Rousseau.
— Stefan Kanfer

The literary comeback of the century.
— Jonathan Rosen

[Mercy of a Rude Stream] is like hearing that Ralph Ellison is publishing a new novel forty-two years after Invisible Man or J. D. Salinger is preparing a sequel to The Catcher in the Rye.

The publication of the complete Mercy of a Rude Stream is an opportunity to appreciate how sublimely strange Roth’s masterpiece is. It is not remotely like anything else in American literature…. It is this pitiless examination of a writer grappling with his demons, at the highest reaches of his intellectual capacity, that gives Mercy of a Rude Stream its ferocious passion…. It is the exhilaration felt by a man who has cast off six decades of self-repression and finally feels himself free.