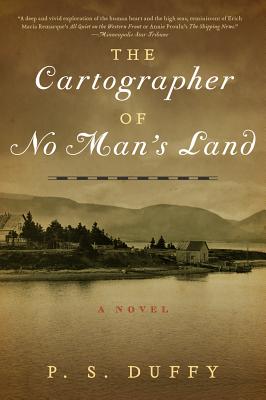 A Guardian Best Book of the Year

Finalist for the Minnesota Book Award


The lauded masterpiece about a family divided by World War I, hailed as “brilliant . . . altogether a remarkable debut” (Simon Mawer, author of The Glass Room).

From a village in Nova Scotia to the trenches of France, P. S. Duffy’s astonishing debut showcases a rare talent emerging in midlife.


When his beloved brother-in-law goes missing at the front in 1916, Angus defies his pacifist upbringing to join the war and find him. Assured a position as a cartographer in London, he is instead sent directly into battle. Meanwhile, at home, his son Simon Peter must navigate escalating hostility in a town torn by grief. Selected as both a Barnes & Noble Discover pick and one of the American Bookseller Association’s Debut Dozen, The Cartographer of No Man’s Land offers a soulful portrayal of World War I and the lives that were forever changed by it, both on the battlefield and at home.

Compelling...Turning the final page, I wanted to go back to the beginning, if only to contemplate a writer who has such a broad and compassionate understanding of the human condition.
— Frances Itani - The Washington Post

Debut author P.S. Duffy captures the brutal intensity of the war in her delicate, atmospheric prose (star shells light the sky "with a cascading trail of sparks"), but it's the parallel story of how Hettie and Angus's 14-year-old son survive in his absence—while protecting an innocent German school teacher—that keeps you riveted.
— O Magazine

Both settings come to life
thanks to Duffy’s full realization—each character, however minor, is a distinct
personality…her patience in developing the cast of characters makes for an
unusually rich novel.
— Booklist, Starred Review

To call this novel a coming-of-age story is not nearly enough; every character in this beautiful novel—young or old—is faced with a rapidly changing world and the task of finding firm-footing within it. Never sentimental, Duffy knows where to find the humanity at the heart of even the smallest gestures. By the end I was so immersed in this story that I swear I could hear water lapping the pilings.
— Mary Beth Keane, author of Fever

A graceful, dignified look at all the ways in which war is endured: from the stories people tell to keep themselves alive at the front, to the fault lines that threaten the home-front bond. This is a moving and memorable debut.
— Jessica Francis Kane, author of The Report

A haunting meditation on family, friendship, and sacrifice. . . . A powerful debut.
— Amy Brill, author of The Movement of Stars

P. S. Duffy grew up in Baltimore, Maryland, and spent summers sailing in Nova Scotia. She is a science writer for the Mayo Clinic in Rochester, Minnesota, where she lives with her husband.
Loading...
or
Not Currently Available for Direct Purchase