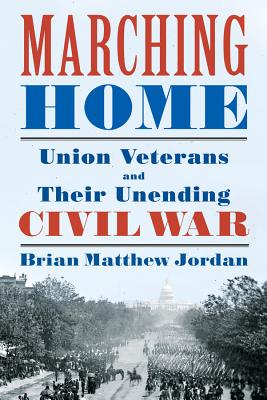 A groundbreaking investigation examining the fate of Union veterans who won the war but couldn’t bear the peace.


In the model of twenty-first-century histories like Drew Gilpin Faust’s This Republic of Suffering or Maya Jasanoff ’s Liberty’s Exiles that illuminate the plight of the common man, Marching Home makes almost unbearably personal the rage and regret of Union veterans. Their untold stories are critically relevant today.

Exhaustively researched…. Mr. Jordan, a lecturer at Gettysburg College, has uncovered a rich trove of journals, letters and published accounts revealing the enormous toll that the Civil War took on its participants…. Books like [Marching Home] contribute to a much broader cultural narrative.

Using evidence from diaries, letters, pension records, regimental histories and other sources, [Jordan] constructs a far darker narrative of veterans profoundly and permanently alienated from a civilian public that neither understood nor properly acknowledged their wartime sacrifice… Marching Home also brings into sharp relief the gulf—present in every war—that developed between soldiers and people on the home front who did not experience, and thus could not grasp, the reality of military service… Readers will find in Marching Home a powerful exploration of how some Union veterans made the transition from military service to civilian life.

Readers of this clearly written and exhaustively researched book will come away with a deeper appreciation of the sacrifices soldiers make; many living veterans will thank Jordan for his attention to an often neglected but important aspect of U.S. military history.
— Walter Russell Mead - Foreign Affairs

[Marching Home] provides us with yet another cautionary tale from the Civil War—that the pain of war endures long after the stacking of arms or the signing of an armistice. A fact that those who clamor for U.S. military intervention in every conflict too often forget.

As historian Jordan demonstrates in his engrossing debut outing, for the men of the Union Army, the war didn’t end at Appomattox… Jordan’s thoughtful, well-researched book exposes the under-acknowledged realities faced by Civil War veterans—with disturbing echoes in the modern era.
— Publishers Weekly

An eloquent elegy to the “Boys in Blue,” Jordan’s Marching Home follows the Union Army veteran from armistice through the enduring psychic and political civil war that came after. Sensitively written and impeccably researched, Jordan’s inspiring debut animates the struggles of countless “Billy Yanks” to secure recognition, compensation, and basic human dignity until the death of the last survivor in 1956. It will stand as an important contribution to the history of the American veteran.

Billy Yank’s Civil War did not end with Appomattox. Rather, as Brian Matthew Jordan shows in his literate, beautifully crafted book, the homeward journey of the Union soldier was a long and bitter one. Racked by painful recollections of the battlefield, unprepared for the ways of civilian life, and greeted with suspicion wherever they went, the shell-shocked veterans lived out their lives unable to let go of the memories of a war that their neighbors seemed determined to forget. Framed as a Homeric odyssey, Jordan’s tale of the Union soldier combines unflinching honesty with generous humanity.
— James Oakes, author of Freedom National: The Destruction of Slavery in the United States, 1861 - 1865

[A] wonderful antidote for the fog of romanticism that clouds the public’s memory of the Civil War…. Jordan’s book is an important contribution to the scholarship of the life of Union soldiers after the war. It is honest and cynical, poetic and disturbing. Here is a brutal reminder of the realities of war and life after war. As we cope today with the many former soldiers of modern wars and their struggles against Post Traumatic Stress Disorder and other maladies, it is good to be reminded—as Lincoln did in 1864—that we have an obligation to ‘bind up the nation’s wounds, to care for him who shall have borne the battle and for his widow and his orphan, to do all which may achieve and cherish a just and lasting peace among ourselves and with all nations.
— Emerging Civil War

Brian Matthew Jordan is an associate professor of history at Sam Houston State University. His first book, Marching Home: Union Veterans and Their Unending Civil War, was a finalist for the Pulitzer Prize in history. He lives in Willis, Texas.
Loading...
or
Not Currently Available for Direct Purchase