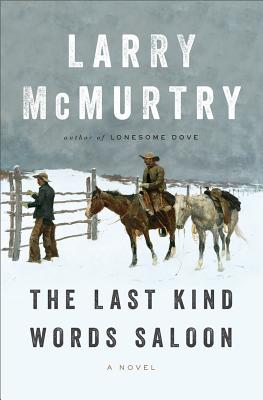 The triumphant return of Larry McMurtry with this ballad in prose: his heartfelt tribute to a bygone era of the American West.


Larry McMurtry has done more than any other living writer to shape our literary imagination of the American West. With The Last Kind Words Saloon he returns again to the vivid and unsparing portrait of the nineteenth-century and cowboy lifestyle made so memorable in his classic Lonesome Dove. Evoking the greatest characters and legends of the Old Wild West, here McMurtry tells the story of the closing of the American frontier through the travails of two of its most immortal figures: Wyatt Earp and Doc Holliday.


Opening in the settlement of Long Grass, Texas—not quite in Kansas, and nearly New Mexico—we encounter the taciturn Wyatt, whiling away his time in between bottles, and the dentist-turned-gunslinger Doc, more adept at poker than extracting teeth. Now hailed as heroes for their days of subduing drunks in Abilene and Dodge—more often with a mean look than a pistol—Wyatt and Doc are living out the last days of a way of life that is passing into history, two men never more aware of the growing distance between their lives and their legends.

Along with Wyatt's wife, Jessie, who runs the titular saloon, we meet Lord Ernle, an English baron; the exotic courtesan San Saba, "the most beautiful whore on the plains"; Charlie Goodnight, the Texas Ranger turned cattle driver last seen in McMurtry's Comanche Moon, and Nellie Courtright, the witty and irrepressible heroine of Telegraph Days.

McMurtry traces the rich and varied friendship of Wyatt Earp and Doc Holiday from the town of Long Grass to Buffalo Bill's Wild West Show in Denver, then to Mobetie, Texas, and finally to Tombstone, Arizona, culminating with the famed gunfight at the O.K. Corral, rendered here in McMurtry's stark and peerless prose.

With the buffalo herds gone, the Comanche defeated, and vast swaths of the Great Plains being enclosed by cattle ranches, Wyatt and Doc live on, even as the storied West that forged their myths disappears. As harsh and beautiful, and as brutal and captivating as the open range it depicts, The Last Kind Words Saloon celebrates the genius of one of our most original American writers.

Larry McMurtry is an award-winning novelist, essayist, and avid bookseller and collector, who won an Academy Award for the screenplay of Brokeback Mountain with cowriter Diana Ossana. Awarded in 2014 the National Humanities Medal for his body of work, his novels include Lonesome Dove and, most recently, The Last Kind Words Saloon. He lives in Archer City, Texas.

Praise For The Last Kind Words Saloon: A Novel…

Larry McMurtry possesses one of the most engaging, tempting-to-imitate voices in contemporary American fiction, a voice so smooth and mellow you can almost hear the ice clink against the glass as he talks.
— Max Byrd

[The Last Kind Words Saloon] is never dull, and it’s also very funny. As always, McMurtry’s characters are plain-spoken but subtle and full of dry humor… Moseying along with McMurtry is always worthwhile.

The Last Kind Words Saloon is a beautiful, dreamy, deeply melancholy book, connecting legend and disparate threads of history in a seamless pastiche of tall tales drawn against the context of their real circumstances.

In this ‘ballad in prose,’ as McMurtry describes his latest book, he paints the familiar historical characters in unfamiliar ways… lovely.
— Richard Eisenberg

A deftly narrated, often comically subversive work of fiction… If Lonesome Dove is a chronicle of the cattle-driving West that contains within its vast, broad ranges a small but heartrending intimate tragedy of paternal neglect, The Last Kind Words Saloon is a dark postmodernist modernist comedy.

Those who enjoy McMurtry’s rueful humor and understated tone of elegiac melancholy will devour the book in one setting.
— Michael Lindgren