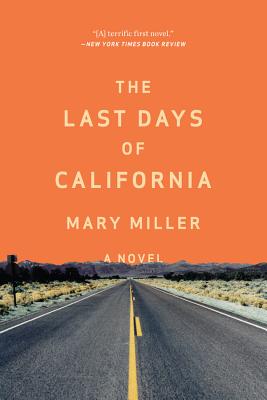 The Last Days of California

“Two sisters bicker with one another over the space in a car's backseat, gas station snack choices, motel room beds, and boys, of course. Only this isn't another angst-ridden coming-of-age road trip novel. This family is driving from Georgia to California so its members can witness the Rapture as it rolls through the world's time zones and arrives, at blessed last, in Pacific Standard Time. A swift, quirky, earnest read that will resonate with anyone who's ever been to a church sleepover, proselytized, or just been a teenager.”
— Stacie M. Williams, Boswell Book Company, Milwaukee, WI
View the List

Jess is fifteen years old and waiting for the world to end. Her evangelical father has packed up the family to drive west to California, hoping to save as many souls as possible before the Second Coming. With her long-suffering mother and rebellious (and secretly pregnant) sister, Jess hands out tracts to nonbelievers at every rest stop, Waffle House, and gas station along the way. As Jess’s belief frays, her teenage myopia evolves into awareness about her fracturing family. Selected as a Barnes & Noble Discover pick and an Indie Next pick, Mary Miller’s radiant debut novel reinvigorates the literary road-trip story with wry vulnerability and savage charm.

Praise For The Last Days of California: A Novel…

Hilarious and heartbreaking, dark and beautiful, a novel written by one of the most observant and mordant writers alive…This book is terrific.
— Elizabeth McCracken, author of An Exact Replica of a Figment of My Imagination and The Giant’s House

The Last Days of California is a beautiful examination of youth and family and what it means to be alive (and to fear dying) in contemporary America…every scene…tremble[s] with significance… Rarely, if ever, have we seen young American womanhood painted in such a raw and honest and heartbreaking way.

The Last Days of California is the Sense and Sensibility of pre-Apocalypse America, and Jess and Elise may be my new favorite literary sisters: different as night and day, on a road trip to the Rapture with their Evangelical parents, they find they have nothing to lose but each other. Mary Miller is a ventriloquist of adolescent angst and a nervy surveyor of American culture.

An affecting coming-of-age story from an inspired new voice.
— Elliott Holt, author of You are One of Them

A literary snapshot of our times that portrays the affirmation and doubt we often find in family and faith.
— Wiley Cash, New York Times best-selling author of This Dark Road to Mercy and A Land More Kind Than Home

Miller portrays her characters…with an unwavering intensity…. Miller’s prose bestows a magnetic beauty on gas-station bathroom stops, Waffle House lunches, and the cast of overfed, overstimulated travelers the Metcalfs encounter along the interstates. …A plangent portrait of American adolescence…. [She delivers] raw the heartbreaking futility of the Metcalfs’ small triumphs, private embarrassments, and poor decisions with such hilarious precision that you become completely involved in their struggles—and, ultimately, in awe of their abiding hope.
— Catherine Straut - ELLE

Miller’s depiction of a squabbling, love-you-one-minute, hate-you-the-next family dynamic is spot-on, hilarious, and ultra-relatable…. Sometimes a road-trip novel, particularly one as compulsively devourable as The Last Days of California, is just what you need to get that elusively giddy, hopeful feeling back.

Mary Miller is the author of three previous books, including the story collection Always Happy Hour and the novel The Last Days of California. She is a former James A. Michener Fellow and John and Renée Grisham Writer-in-Residence. She lives in Oxford, Mississippi.

Jess spends a lot of time describing the food she and her family eat on the road. What does food mean to Jess—why is it so significant, and do you think the kind of food she eats says something about her?

Jess believes that Elise’s looks make life easier for her. Do you agree? How would you describe Jess’s body image? Why do you think she is so observant of other peoples’ appearances?

What were your first impressions of each of the Metcalfs? How do your initial impressions change during their trip? Did any characters surprise you?

Jess doesn’t rebel as openly against religion as Elise does. How would you describe Jess’s faith? Do you think her belief in God changes?

After Jess’s experience with Gabe, Elise tells her, “You’re stronger than I am.” Jess disagrees. What makes Elise say that? Why doesn’t Jess believe it? Do you think it’s true?

What would you do if you believed the world was ending?

Jess’s mother is an enigmatic character. What do you think makes her tick? How would you describe her relationship with Jess? With Elise? Do you think her daughters know her well?

Does Jess’s experience of being a teenager remind you of your own? How so? Do you relate more to Jess or to Elise, or to another character entirely?

What do you think drives Elise’s rebellious and reckless attitude? What drives Jess’s relative caution? Does the close proximity of the road trip seem to alter their behavior?

During this trip, Jess has her first two sexual experiences. What precipitates each encounter? What does Jess get out of them, and how do they affect her?

How would you characterize Jess and Elise’s relationship? When is their relationship strongest, and when is it most fragile? Do you think theirs is a typical sibling relationship?

Why do you think the novel is called The Last Days of California?

How does the road trip change each of the Metcalfs? What do you think happens to them after the close of the novel? What kind of future do you see for Jess?