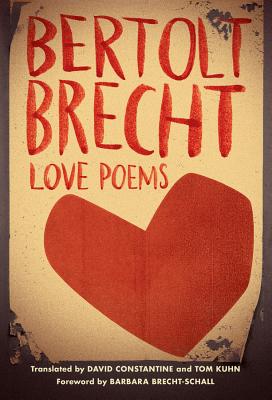 An historic publication in which the legendary German poet and dramatist emerges, quite like Goethe, as a poet driven by Eros.

Bertolt Brecht is widely considered the greatest German playwright of the twentieth century, and to this day remains best known as a dramatist, the author of Mother Courage, The Threepenny Opera, and The Caucasian Chalk Circle, among so many other works. However, Brecht was also a hugely prolific and eclectic poet, producing more than 2,000 poems during his lifetime—indeed, so many that even his own wife, Helene Weigel, had no idea just how many he had written.


"A thieving magpie of much of world literature," the full scope and variety of his poetic output did not become apparent until after his death. Now, the English-speaking world can access part of his stunning body of work in Love Poems, the first volume in a monumental undertaking by award-winning translators David Constantine and Tom Kuhn to translate Brecht's poetic legacy into English. Love Poems collects his most intimate and romantic poems, many of which were banned in German in the 1950s for their explicit eroticism.

Written between 1918 and 1955, these poems reflect an artist driven not only by the bitter and violent politics of his age but, like Goethe, by the untrammeled forces of love, romance, and erotic desire. In a 1966 New Yorker article, Hannah Arendt wrote of Brecht that he had "staked his life and his art as few poets have ever done." In these 78 poems, we see Brecht's astonishing and deeply personal love poems—including 22 never before published in English—many addressed to particular women, which show Brecht as lover and love poet, engaged in a bitter struggle to keep faith, hope, and love alive during desperate times.

Featuring a personal foreword by Barbara Brecht-Schall, his last surviving child, Love Poems reveals Brecht as not merely one of the most famous playwrights of the twentieth century but also one of its most fiercely creative poets.

Papa loved women, many women…His passion, whether expressed to women, to his art, or to his children, seemed all-encompassing.
— Barbara Brecht-Schall, from the foreword

Brecht often uses his poetry to persuade, seduce; it's never sexist, just earthy and alive…The translators are to be thanked for bringing attention to these otherwise forgotten gems, both naughty and nice.
— Tom Lavoie - Shelf Awareness

A surprising cache of seventy-eight works nimbly translated by David Constantine and Tom Kuhn, with an introduction by Barbara Brecht-Schall…. They span a range of forms and formality, from tightly written sonnets to jaunty doggerel, and a marvelous scale of voices, from the filthy to the forlorn. For many, they will be a revelation…. Love Poems could even open the door to veneration.

Bertolt Brecht (1898–1956) was a German poet, playwright, and theater director. In those capacities, and also as a polemical essayist, he contributed powerfully to the chief literary and political debates of his day, and lastingly influenced theatrical theory and practice. He left more than 2,000 poems, assuring him a place among the very best lyric poets of Germany.

David Constantine is a freelance writer and translator. His most recent volume of poetry is Elder (2014); his fourth collection of short stories, Tea at the Midland, won the Frank O’ Connor International Short Story Award in 2013.

Tom Kuhn teaches at the University of Oxford, where he is a Fellow of St Hugh’s College. He works on twentieth-century drama and German exile literature and has been, since 1996, editor of the main English-language Brecht edition.
Loading...
or
Not Currently Available for Direct Purchase