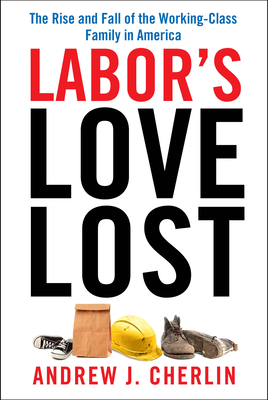 The Rise and Fall of the Working-Class Family in America

Two generations ago, young men and women with only a high-school degree would have entered the plentiful industrial occupations which then sustained the middle-class ideal of a male-breadwinner family. Such jobs have all but vanished over the past forty years, and in their absence ever-growing numbers of young adults now hold precarious, low-paid jobs with few fringe benefits. Facing such insecure economic prospects, less-educated young adults are increasingly forgoing marriage and are having children within unstable cohabiting relationships. This has created a large marriage gap between them and their more affluent, college-educated peers. In Labor’s Love Lost, noted sociologist Andrew Cherlin offers a new historical assessment of the rise and fall of working-class families in America, demonstrating how momentous social and economic transformations have contributed to the collapse of this once-stable social class and what this seismic cultural shift means for the nation’s future. Drawing from more than a hundred years of census data, Cherlin documents how today’s marriage gap mirrors that of the Gilded Age of the late-nineteenth century, a time of high inequality much like our own. Cherlin demonstrates that the widespread prosperity of working-class families in the mid-twentieth century, when both income inequality and the marriage gap were low, is the true outlier in the history of the American family. In fact, changes in the economy, culture, and family formation in recent decades have been so great that Cherlin suggests that the working-class family pattern has largely disappeared. Labor's Love Lost shows that the primary problem of the fall of the working-class family from its mid-twentieth century peak is not that the male-breadwinner family has declined, but that nothing stable has replaced it. The breakdown of a stable family structure has serious consequences for low-income families, particularly for children, many of whom underperform in school, thereby reducing their future employment prospects and perpetuating an intergenerational cycle of economic disadvantage. To address this disparity, Cherlin recommends policies to foster educational opportunities for children and adolescents from disadvantaged families. He also stresses the need for labor market interventions, such as subsidizing low wages through tax credits and raising the minimum wage. Labor's Love Lost provides a compelling analysis of the historical dynamics and ramifications of the growing number of young adults disconnected from steady, decent-paying jobs and from marriage. Cherlin’s investigation of today’s “would-be working class” shines a much-needed spotlight on the struggling middle of our society in today’s new Gilded Age.

Praise For Labor's Love Lost: The Rise and Fall of the Working-Class Family in America…

“A cogent, balanced analysis of why the gap between the ‘haves’ and ‘have-nots’ has grown in family life as well as economic life. Culture counts in family out-comes, Cherlin explains, but its impact is filtered through income inequality and job instability in ways that can’t be solved by a return to ‘traditional’ values. A must-read for policy-makers and concerned citizens.”

“Without a doubt, Cherlin’s account of the changing circumstance of working- class families is the most comprehensive, engaging, and convincing explanation of why and how our family system has changed in the past half century. His book will be relished by historians and sociologists alike.”

“America’s top scholar of families has given us a masterful and sobering overview of the changing fate of the working class. Their relational standards for marriage sound ever more middle class, while their nonmarital births and unstable relation-ships are reminiscent of patterns limited to the poor decades ago.”

ANDREW J. CHERLIN is the Benjamin H. Griswold III Professor of Public Policy in the Department of Sociology at the Johns Hopkins University.
Loading...
or
Not Currently Available for Direct Purchase