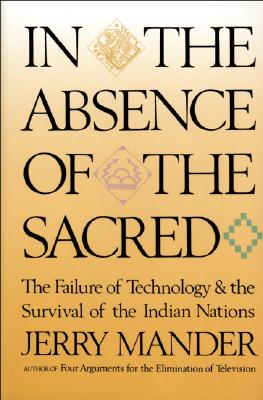 In the Absence of the Sacred

The Failure of Technology and the Survival of the Indian Nations

In his critically acclaimed Four Arguments for the Elimination of Television, author and social critic Jerry Mander proclaimed that television, by its fundamental nature, is dangerous—to personal health and sanity, to the environment, and to the democratic process. With In the Absence of the Sacred, he goes beyond television to critique our technological society as a whole.
In this provocative work, Mander challenges the utopian promise of technological society and tracks its devastating impact on native cultures worldwide. The Western world’s loss of a sense of the sacred in the natural world, he says, has led us toward global environmental disaster and social disorder—and worse lies ahead. Yet models for restoring our relationship with the Earth exist in the cultures of native peoples, whose values and skills have enabled them to survive centuries of invasion and exploitation.
Far from creating paradise on Earth, technology has instead produced an unsustainable contest for resources. Mander surveys the major technologies shaping the “new world order”—computers, telecommunications, space exploration, genetic engineering, robotics, and the corporation itself—and warns that they are merging into a global mega-technology, with dire environmental and political results.