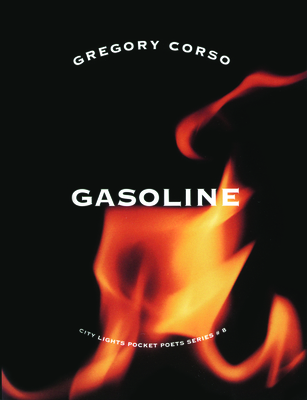 Open this book as you would a box of crazy toys, take in your hands a refinement of beauty out of a destructive atmosphere. These combinations are imaginary and pure, in accordance with Corso's individual (therefore universal) desire.--Allen Ginsberg

Gregory is a gambler. He suffers reverses, like every man who takes chances. But his vitality and resilience always shine through, with a light that is more than human: The immortal light of his muse.--William S. Burroughs

. . . A touch young kid from the Lower East Side who rose like an angel over the rooftops and sang Italian songs as sweet as Caruso and Sinatra, but in words . . . Amazing and Beautiful Gregory Corso, The one and only Gregory the Herald. Read slowly and see.--Jack Kerouac

M]ore than fifty years on from when it was first published in 1958, Gasoline (City Lights, 1958) by Beat poet Gregory Corso is a seminal book in the birth of that particular literary generation.--Paul Stubbs, 3AM Magazine

Gregory Corso's first book of poetry, The Vestal Lady on Brattle, was published by City Lights Press in 1955. Born in New York City and raised in Little Italy, Gregory Corso was an American Poet and the youngest of the iconic Beat Generation writers. Homeless and family-less, Corso was arrested at 13 for petty theft and larcenry and spent some time in New York's infamous jail The Tombs. He was arrested again, but was admitted to Bellevue Hospital Center. On the night of his 18th birthday, he was arrested again and convicted as an adult, resulting in being detained in Clinton State Prison. Gasoline is dedicated to the Angels of Clinton Prison... Corso met Allen Ginsberg in 1951 and Ginsberg recognized Corso as spiritually gifted. Together they traveled from New York to San Francisco to Paris where Corso wrote some of his most famous poems Bomb and Marriage. His journey to, in, and around Paris resulted in his third book of poetry which included poems The Happy Birthday of Death, Minutes to Go, The American Express, and Long Live Man. He returned to New York in 1958 only to discover he and the other Beat writers had become famous literary figures. Corso and Ginsberg traveled to college campuses and read their famous works Howl, Bomb and Marriage. On January 17, 2001, Corso died from prostate cancer.
Loading...
or support indie stores by buying on