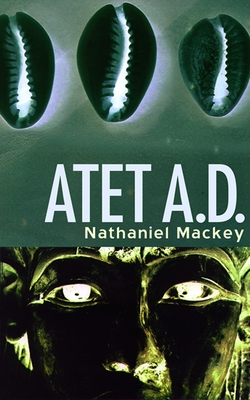 Atet A.D. is the third volume of Nathaniel Mackey's ongoing epistolary fiction, From a Broken Bottle Traces of Perfume Still Emanate. Like the first two volumes, Bedouin Hornbook and Djbot Baghostus's Run, this work is written by the composer/multi-instrumentalist N., a founding member of a band formerly known as the Mystic Horn Society.

The letters in Atet A.D. span a seven-month period beginning shortly after Thelonious Monk's death and culminating in the band recording their first album on John Coltrane's birthday. Rendered in N.'s distinctive mix of discursive registers, they chronicle and meditate upon, among other events, Penguin's return from seclusion, N.'s recurring cowrie shell attacks, the band's adoption of a new name, and their being beset, beginning with a gig in Seattle, by a new, perplexing twist in their expressive powers.

As with all of Mackey's prose fiction, his hermeneutic speculations are advanced as much by the power of puns as by syllogistic reasoning. For all the wordplay, Mackey manages to cover a lot of ground in this neo-novel, which is not so much about characters as it is about ideas and themes like gender equality, the survival of African customs and spiritual values in America, and the play of dreams within our waking realities. Most idiosyncratically, Mackey, with his nuanced knowledge of jazz, convinces the reader that music operates like a language, with all the power to convey, say, a specific feminist critique of male-centered jazz culture, or to acquire levels of symbolism that would make Dante wonder if he should have taken up sax.--Publishers Weekly

Atet A.D. is a fascinating work of poetic/musical fiction-storytelling that plays with, and is inspired by, language and the mystical concepts and connections that arise unbidden from the manipulation of metaphor and meaning, while simultaneously fueled by the sounds and energy of American jazz which Mackey views as a source of spiritual and sexual discipline and discovery.--Art Lange, Pulse

Nathaniel Mackey, recipient of a 1993 Whiting Writers' Award, is the author of School of Udhra and Whatsaid Serif, both also published by City Lights Publishers. He won the National Book Award for Poetry in 2006, was awarded the Ruth Lilly Poetry Prize in 2014, and won Yale's Bollingen Prize for American Poetry in 2015. He teaches a poetry workshop at Duke University.