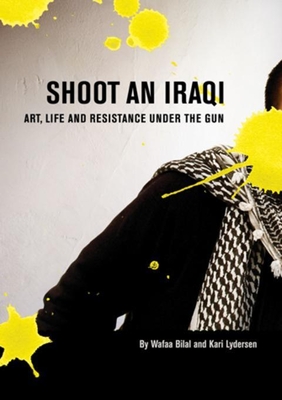 Art, Life and Resistance Under the Gun

Wafaa Bilal's childhood in Iraq was defined by the horrific rule of Saddam Hussein, two wars, a bloody uprising and time spent interned in chaotic refugee camps in Kuwait and Saudi Arabia. Bilal eventually made it to the United States to become a professor and a successful artist, but when his brother was killed by an unmanned U.S. Predator drone, he decided to use his art to confront those in the comfort zone with the realities of life in a conflict zone.

His response was "Domestic Tension," an unsettling interactive performance piece: for one month, Bilal lived alone in a prison cell-sized room in the line of fire of a remote-controlled paintball gun and a camera that connected him to Internet viewers around the world. Visitors to the gallery and a virtual audience that grew by the thousands could shoot at him twenty-four hours a day. The project received overwhelming worldwide attention and spawned provocative online debates; ultimately, Bilal was named Chicago Tribune's Artist of the Year.

Structured in two parallel narratives, the story of Bilal's life journey and his "Domestic Tension" experience, Shoot an Iraqi, is for anyone who seeks insight into the current conflict in Iraq and for those fascinated by interactive art technologies and the ever-expanding world of online gaming.

Iraqi-born artist Wafaa Bilal has exhibited his art worldwide, and traveled and lectured extensively to inform audiences of the situation of the Iraqi people, and the importance of peaceful conflict resolution. Bilal's 2007 dynamic installation Domestic Tension gained global recognition, being named Artist of the Year by the Chicago Tribune. Bilal has held exhibitions in Baghdad, the Netherlands, Thailand and Croatia; as well as at the Museum of Contemporary Photography in Chicago, the Milwaukee Art Museum and various other US galleries. His residencies have included Montalvo Arts Center in Saratoga, California; Catwalk in New New York; and Rensselaer Polytechnic Institute.

Iraqi artist Wafaa Bilal, a professor at the Art Institute of Chicago, has exhibited his art worldwide and lectured extensively to inform audiences of the situation of the Iraqi people. Bilal's interactive installation Domestic Tension garnered praise in national and international press, including Newsweek and a Chicago Tribune Artist of the Year award. Wafaa Bilal caused a stir in in the art world again with his project The 3rd I, which includes Bilal surgically implanting a camera in the back his head. Bilal describes this project as a comment on the inaccessibility of time, and the inability to capture memory and experience.Kari Lydersen is a staff writer at The Washington Post Midwest bureau and author of Out of the Sea and Into the Fire: Latin American-US Immigration in the Global Age.
Loading...
or support indie stores by buying on