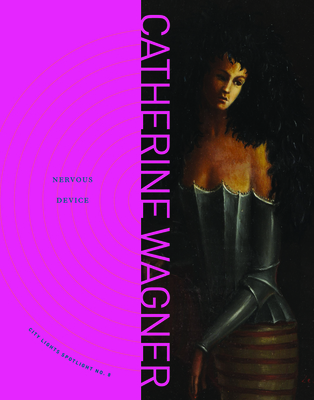 In Nervous Device, Catherine Wagner takes inspiration from William Blake's bounding line to explore the poem as a body at the intersection between poet and audience. Using this as a figure for sexual, political and economic interactions, Wagner's poems shift between seductive lyricism and brash fragmentation as they negotiate the failure of human connection in the twilight of American empire. Intellectually informed, yet insistent on their objecthood, Wagner's poems express a self-conscious skepticism even as they maintain an optimistically charged eroticism.

Wagner's fourth collection contains poems of memory and dark artifice. She writes with an obscure, magnetic lens. . . . Wagner contrasts these complicated poems with short, clean, pieces that offer a kind of breathing space for the reader. Not to be mistaken for trivial, the linguistic tightness of these poems are highlights of Wagner's collection.--Publishers Weekly

Taking with one hand what they give with the other, Wagner's poems are full of vehemence and disdain and tenderness and somewhere, in some inexpugnable part of the body of language through which so many discomforting feelings pass, a thorny kind of joy. This is my idea of great poetry: in which 'The actual is / flickering a binary / between word and not-word.'--Barry Schwabsky, Hyperallergic

Nervous Device is such a smart book. You never know where the poems are going to take you, or when some startling, often cringe-making image or thought will intrude. Unable to settle into a comfortable rhetorical space, these poems reject simple claims to knowing something or doing right or changing the world. Rather, they move like an erratic insect stuck in a language bell jar. Brilliant, and disturbing.--Jennifer Moxley

Nervous Device, the human machine, palpitating inside its own little bounding lines. These poems do everything the human device does, vibrating like an electrified tornado inside a glass jar, and make this reader profoundly alive to huge swathes of being. There is no machine for mastering the self (yet), but there are Cathy Wagner's poems.--Eleni Sikelianos

The poems in Nervous Device resonate with a knowing nod to time and the difficulty and struggle of being sentient and intimate--of loving while being human. This is poetry connectivty: sexy, poignant, knowing. And the poems here make me feel possible.--Hoa Nguyen

The notion that the audience is 'putting their] finger in her] vagina' while reading Nervous Device signals one of Wagner's primary thematic concerns in the collection: the complex relationship between poetry, sex, desire, and the body.--Joshua Ware

Wagner is to be lauded, first and foremost, for her daring, her conceptual eclecticism, and her linguistic range. . . . Nervous Device is a clear-eyed and brave testament to the changing currents of a poet's life.--Seth Abramson, The Huffington Post

. . . the manner in which Wagner structures the language through repetitive dialogue both builds meaning and breaks it apart. . . . Wagner balances disjunction and lucidity, private and public, distant and (riskily) up-close.--Jessica Comola, HTML Giant

"Wagner’s fourth collection contains poems of memory and dark artifice. She writes with an obscure, magnetic lens. Wagner’s longer poems are willfully disorienting: A Well Is a Mine: A Good Belongs to Me” consists almost entirely of lines encased in quotation marks that confront slavery and invent equations: Freedom × Need = Reality.” Wagner contrasts these complicated poems with short, clean, pieces that offer a kind of breathing space for the reader. Not to be mistaken for trivial, the linguistic tightness of these poems are highlights of Wagner’s collection. Ta” describes a drowning television: o’er and o’er/ let it stink way down/ and coral grew there./ Covered it oar./ Let miserere deep./ Be mine for’air.” The poems delve into and self-consciously warp body, sex, and language. Unclang” explores writing poetry: it takes experience to write a real poem that is well-lit,” Wagner argues. Later in the same poem we are blindsided by the haunting statement that writing a poem is like reaching two prosthetic limbs out as far as you can on either side to grab something in front of you. You can’t grab it but maybe you’ll take flight.”Publisher's Weekly

"Drawing from her own experiences examining sex and sexuality after her divorce, describing her experiences with pregnancy and motherhood, and giving small snapshots into her domestic life Wagner’s work is highly personal, weaving together a quiet intensity with lyrical wordplay....Like any true artist, she recognizes the need to explore what makes her uncomfortable. Her latest work, Nervous Device, does just that, exploring the poet’s role as performer and the boundaries between poet and audience."Art Animal

Catherine Wagner was born in Burma to American military parents, afterwards living in the Philippines, Indonesia, Yemen and India before moving to the US. She received her MFA from the Iowa Writers' Workshop, studying with Jorie Graham, Donald Revell and Denis Johnson, and a PhD from the University of Utah. She is an Associate Professor of English at Miami University.
Loading...
or support indie stores by buying on