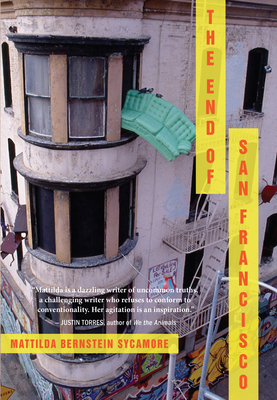 The End of San Francisco

The End of San Francisco breaks apart the conventions of memoir to reveal the passions and perils of a life that refuses to conform to the rules of straight or gay normalcy. A budding queer activist escapes to San Francisco, in search of a world more politically charged, sexually saturated, and ethically consistent--this is the person who evolves into Mattilda Bernstein Sycamore, infamous radical queer troublemaker, organizer and agitator, community builder and anti-assimilationist commentator. Here is the tender, provocative and exuberant story of the formation of one of the contemporary queer movement's most savvy and outrageous writers and spokespersons.

Using an unrestrained associative style to move kaleidoscopically between past, present and future, Sycamore conjures the untidy push and pull of memory, exposing the tensions between idealism and critical engagement, trauma and self-actualization, inspiration and loss. Part memoir, part social history and part elegy, The End of San Francisco explores and explodes the dream of a radical queer community and the mythical city that was supposed to nurture it.

Mattilda is a dazzling writer of uncommon truths, a challenging writer who refuses to conform to conventionality. Her agitation is an inspiration.--Justin Torres, author of We the Animals

Bring on The End of San Francisco And Mattilda Bernstein Sycamore, whose new book has reinvented memoir without the predictable gloss of passive resolution. This book is undeniably brave and new, and the internal energy churning at its core is like nothing you've seen, heard or read before. I swear.--T. Cooper, author of Real Man Adventures

We hear so much about coming-of-age narratives that we seldom think about going-of-age--the shutting down and closure, the making sense of where we've been. Written with grace, reserve and the honest tremblings that come when things matter, Mattilda shows us that The End of San Francisco is really the beginning of joy.--Daphne Gottlieb, author of 15 Ways to Stay Alive

It would be easy to describe The End of San Francisco as a Joycean 'Portrait of the Artist as a Young Queer' (although the book's intense stream of consciousness is reminiscent of the later, more experimental, Joyce) . . . but this is misleading. This journey of a life that begins in the professional upper-middle class (both parents are therapists) and the Ivy League and moves to hustling, drugs, activism--Sycamore was active in ACT UP and Queer Nation--and queer bohemian grunge, is profoundly American. At heart, Sycamore is writing about the need to escape control through flight or obliteration.--Michael Bronski, San Francisco Chronicle

But, some of my favorite writers and people released books this year. Like Mattilda Bernstein Sycamore's beautiful book about queerness and community and lack of and disappointment and marginalization and gentrification and sex, The End of San Francisco. God, I love that book, on a sentence level it is just heartbreaking.--Jessa Crispin, Bookslut

Mattilda Bernstein Sycamore is the editor of four anthologies, including Why Are Faggots So Afraid of Faggots, That's Revolting, and Nobody Passes, and two novels. She writes regularly for a variety of publications, including the San Francisco Bay Guardian, Bitch, Bookslut, Alternet and Time Out New York, and is the reviews editor at the feminist magazine Make/shift. She lives in Seattle, WA.

Mattilda Bernstein Sycamore is the gender-bending author of the highly praised novels, Pulling Taffy and So Many Ways to Sleep Badly, and the editor of four nonfiction anthologies, including Why Are Faggots So Afraid of Faggots?, Nobody Passes: Rejecting the Rules of Gender and Conformity and That's Revolting! Queer Strategies for Resisting Assimilation. Sycamore writes regularly for a variety of publications, including Bitch, Utne Reader, AlterNet, Make/Shift, and Maximumrocknroll, and lives in Seattle, WA.
Loading...
or support indie stores by buying on