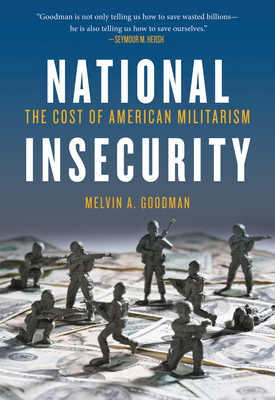 The Cost of American Militarism

By Melvin A. Goodman

"Mel Goodman has spent the last few decades telling us what's gone wrong with American intelligence and the American military, and now, in National Insecurity, he tells us what we must do to change the way the system works, and how to fix it. Goodman is not only telling us how to save wasted billions--he is also telling us how to save ourselves."--Seymour M. Hersh, The New Yorker

Upon leaving the White House in 1961, President Eisenhower famously warned Americans about the dangers of a "military industrial complex," and was clearly worried about the destabilizing effects of a national economy based on outsized investments in military spending. As more and more Americans fall into poverty and the global economy spirals downward, the United States is spending more on the military than ever before. What are the consequences and what can be done?

Melvin A. Goodman, a twenty-four-year veteran of the CIA, brings peerless authority to his argument that US military spending is indeed making Americans poorer and less secure while undermining our political standing in the world. Drawing from his firsthand experience with war planners and intelligence strategists, Goodman offers an insider's critique of the US military economy from President's Eisenhower's farewell warning to Barack Obama's expansion of the military's power. He outlines a much needed vision for how to alter our military policy, practices and spending in order to better position the United States globally and enhance prosperity and security at home.

Melvin A. Goodman is the Director of the National Security Project at the Center for International Policy. A former professor of international security at the National War College and an intelligence adviser to strategic disarmament talks in the 1970s, he is the author of several books, including the critically acclaimed The Failure of Intelligence.

Melvin A. Goodman is a senior fellow at the Center for International Policy in Washington, D.C. and an adjunct professor at Johns Hopkins University. He has been a senior analyst at the CIA and the State Department as well as a professor of international security at the National War College and an intelligence adviser to strategic disarmament talks in the 1970s. He has authored several works, his most recent is the critically acclaimed The Failure of Intelligence: The Decline and Fall of the CIA

Praise For National Insecurity: The Cost of American Militarism…

"Formidably well informed and written with exceptional clarity, Mel Goodman makes a compelling case that now is the time to return the U.S. military to its constitutional role of defending the nation." -- Robert White, Former Ambassador to El Salvador and Paraguay, and Senior Fellow, Center for International Policy

"In National Insecurity Mel Goodman shows how every president since Eisenhower has ceded authority to the Pentagon, to the detriment of our security and our democracy. But he doesn't just lament this dangerous condition -- he provides a road map for demilitarizing our security policy at abroad and at home." -- William D. Hartung, author, Prophets of War: Lockheed Martin and the Making of the Military-Industrial Complex

Praise for The Failure of Intelligence:

"In this study, Mel Goodman tells us that of the misunderstandings, mistakes, and misapplications of American intelligence and force that we've seen since 9/11 are nothing new -- our CIA has been at it since the early days of the Cold War. But Goodman also tells us, with fresh information and insight, about the CIA's successes in those years and, most importantly, he names names again and again. His purpose is not payback, or 'Gotcha,' but to right a dangerous wrong."Seymour Hersh, The New Yorker

"Mel Goodman's career in intelligence has positioned him perfectly to document the Failure of Intelligence, as he has in this critical, timely book. Mel Goodman thoroughly details the Bush administration's lies and manipulations in the lead up to the invasion and occupation of Iraq, as only a CIA insider could. As the lame duck Bush Administration beats the drum for war with Iran, Mel Goodman's Failure of Intelligence is essential reading."Amy Goodman, Democracy Now

One of the agency's prickliest and most highly regarded analysts, Melvin A. Goodman, has given us an insider autopsy. . . . What is most valuable here is the amassing of insider details.” Bookforum