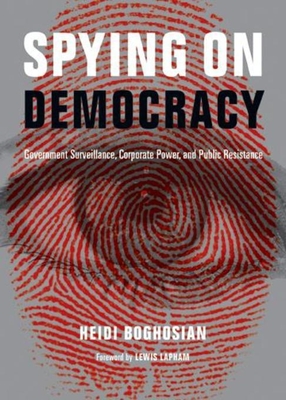 Until the watershed leak of top-secret documents by Edward Snowden to the Guardian UK and the Washington Post, most Americans did not realize the extent to which our government is actively acquiring personal information from telecommunications companies and other corporations. As made startlingly clear, the National Security Agency (NSA) has collected information on every phone call Americans have made over the past seven years. In that same time, the NSA and the FBI have gained the ability to access emails, photos, audio and video chats, and additional content from Google, Facebook, Yahoo, Microsoft, YouTube, Skype, Apple and others, allegedly in order to track foreign targets.

In Spying on Democracy, National Lawyers Guild Executive Director Heidi Boghosian documents the disturbing increase in surveillance of ordinary citizens and the danger it poses to our privacy, our civil liberties and the future of democracy itself. Boghosian reveals how technology is being used to categorize and monitor people based on their associations, their movements, their purchases and their perceived political beliefs. She shows how corporations and government intelligence agencies mine data from sources as diverse as surveillance cameras and unmanned drones to iris scans and medical records, while combing websites, email, phone records and social media for resale to third parties, including U.S. intelligence agencies.

The ACLU's Michael German says of the examples shown in Boghosian's book, "this unrestrained spying is inevitably used to suppress the most essential tools of democracy: the press, political activists, civil rights advocates and conscientious insiders who blow the whistle on corporate malfeasance and government abuse." Boghosian adds, "If the trend is permitted to continue, we will soon live in a society where nothing is confidential, no information is really secure, and our civil liberties are under constant surveillance and control." Spying on Democracy is a timely, invaluable and accessible primer for anyone concerned with protecting privacy, freedom and the U.S. Constitution.

Heidi Boghosian is the Executive Director of the National Lawyers Guild. She co-hosts Law and Disorder, broadcast on WBAI-FM in New York and over forty stations nationwide. She is based in New York City.

"Everyone of us is under the omniscient magnifying glass of the government and corporate spies. . . . How do we respond to this smog of surveillance? Start by reading Spying on Democracy: Government Surveillance, Corporate Power, and Public Resistance by Heidi Boghosian"--Bill Moyers

"Heidi Boghosian's Spying on Democracy is the answer to the question, 'if you're not doing anything wrong, why should you care if someone's watching you?'"--Michael German, Senior Policy Counsel, ACLU and former FBI agent

Heidi Boghosian is the Executive Director of the National Lawyers Guild and oversees the legal defense of protesters and individuals targeted by the government. She co-hosts the program "Law and Disorder" based out of Pacifica radio network's WBAI, New York, and is broadcast to more than 25 states on over 42 stations. Selected writings by Boghosian include Punishing Protest (National Lawyers Guild 2007), Applying Restraints to Private Police (Missouri Law Review 2005) and The Assault on Free Speech, Public Assembly, and Dissent (North River Press 2004). Her books reviews have appeared in The Federal Lawyer and the New York Law Journal.
or
Not Currently Available for Direct Purchase
Copyright © 2020 American Booksellers Association