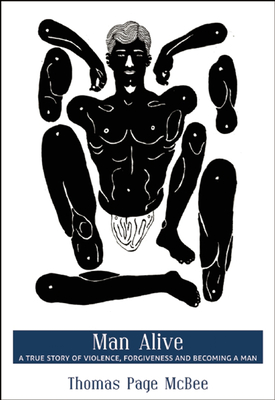 A True Story of Violence, Forgiveness and Becoming a Man (City Lights/Sister Spit)

Thomas Page McBee's Man Alive hurtled through my life. I read it in a matter of hours. It's a confession, it's a poem, it's a time warp, it's a brilliant work of art. I bow down to McBee--his humility, his sense of humor, his insightfulness, his structural deftness, his ability to put into words what is often said but rarely, with such visceral clarity and beauty, communicated.--Heidi Julavits, author of The Vanishers and The Uses of Enchantment

What does it really mean to be a man?

In Man Alive, Thomas Page McBee attempts to answer that question by focusing on two of the men who most impacted his life&mash;one, his otherwise ordinary father who abused him as a child, and the other, a mugger who almost killed him. Standing at the brink of the life-changing decision to transition from female to male, McBee seeks to understand these examples of flawed manhood and tells us how a brush with violence sent him on the quest to untangle a sinister past, and freed him to become the man he was meant to be.

Man Alive engages an extraordinary personal story to tell a universal one--how we all struggle to create ourselves, and how this struggle often requires risks. Far from a transgender transition tell-all, Man Alive grapples with the larger questions of legacy and forgiveness, love and violence, agency and invisibility.

Man Alive is a sweet, tender hurt of a memoir ... about forgiveness and self-discovery, but mostly it's about love, so much love. McBee takes us in his capable hands and shows us what it takes to become a man who is gloriously, gloriously alive.--Roxane Gay, author of Bad Feminist and An Untamed State

Thomas Page McBee's story of how he came to claim both his past and his future is by turns despairing and hopeful, exceptional and relatable. To read it is to witness the birth of a fuller, truer self. I loved this book.--Ann Friedman, columnist, New York Magazine

'Whoever's child I am, my body belongs to me, ' McBee writes, and his book is an elegant, generous transcription of the journey toward this incandescent, non-aggrandized, life-sustaining form of self-possession--the kind that emanates from dispossession, rather than running from it.--Maggie Nelson, author of Bluets and The Art of Cruelty: A Reckoning

Well aware that memory and identity rarely follow a linear path, Thomas Page McBee attempts to answer the question, 'What does it really mean to be a man?' Weaving past and present to do so, the book's journey connects violence, masculinity and forgiveness. McBee has an intelligent heart, and it beats in every sentence of this gorgeous book.--Saeed Jones, author of Prelude to Bruise

Exquisitely written and bristling with emotion, this important book reminds us of how much vulnerability and violence inheres to any identity. A real achievement of form and narrative."--Jack Halberstam, author of The Queer Art of Failure

Thomas Page McBee writes the column Self-Made Man for The Rumpus, and his writings on gender have appeared in The New York Times and via TheAtlantic.com, VICE, BuzzFeed, and Salon. Thomas gives lectures on masculinity and media narratives across the country. He lives in New York City.
Loading...
or support indie stores by buying on