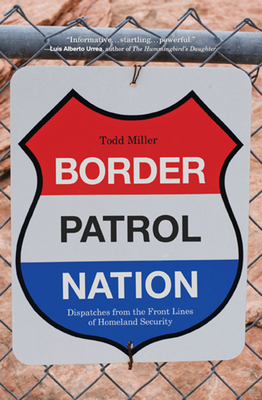 Dispatches from the Front Lines of Homeland Security (Open Media)

"In his scathing and deeply reported examination of the U.S. Border Patrol, Todd Miller argues that the agency has gone rogue since the Sept. 11 terrorist attacks, trampling on the dignity and rights of the undocumented with military-style tactics ... Miller's book arrives at a moment when it appears that part of the Homeland Security apparatus is backpedaling by promising to tone down its tactics, maybe prodded by investigative journalism, maybe by the revelations of NSA leaker Edward Snowden ... Border Patrol is quite possibly the right book at the right time ... "--Tony Perry, Los Angeles Times

"At the start of his unsettling and important new book, Border Patrol Nation, Miller observes that these days 'it is common to see the Border Patrol in places--such as Erie, Pennsylvania; Rochester, New York; or Forks, Washington--where only fifteen years ago it would have seemed far-fetched, if not unfathomable.'"--Barbara Spindel, Christian Science Monitor

"Miller's approach in Border Patrol Nation is to offer a glimpse into the secretive operations of the Border Patrol, reporting with a journalist's objectivity and nose for a good story. Miller's book is full of facts, and it's clear he's outraged, but he gives voices to people on every side of the issue ... Miller's book is a fascinating read ... and bring the work of Susan Orlean to mind."--Amanda Eyre Ward, Kirkus Reviews

"Todd Miller's invaluable and gripping book, Border Patrol Nation: Dispatches from the Front Lines of Homeland Security is the story of how this country's borders are being transformed into up-armored, heavily militarized zones run by a border-industrial complex. It's an achievement and an eye opener."--Tom Engelhardt, TomDispatch

"What Jeremy Scahill was to Blackwater, Todd Miller is to the U.S. Border Patrol "--Tom Miller, author, On the Border: Portraits of America's Southwestern Frontier

"Todd Miller has entered a secret world, and he has gone deep ... Powerful."--Luis Alberto Urrea, author of The Devil's Highway: A True Story

"Journalist Miller tells an alarming story of U.S. Border Patrol and Homeland Security's ever-widening reach into the lives of American citizens and legal immigrants as well as the undocumented. In addition to readers interested in immigration issues, those concerned about the NSA's privacy violations will likely be even more shocked by the actions of Homeland Security."--Publishers Weekly, Starred Review

Armed authorities watch from a military-grade surveillance tower as lines of people stream toward the security checkpoint, tickets in hand, anxious and excited to get through the gate. Few seem to notice or care that the US Border Patrol is monitoring the Super Bowl, as they have for years, one of the many ways that forces created to police the borders are now being used, in an increasingly militarized fashion, to survey and monitor the whole of American society.

In fast-paced prose, Todd Miller sounds an alarm as he chronicles the changing landscape. Traveling the country--and beyond--to speak with the people most involved with and impacted by the Border Patrol, he combines these first-hand encounters with careful research to expose a vast and booming industry for high-end technology, weapons, surveillance, and prisons. While politicians and corporations reap substantial profits, the experiences of millions of men, women, and children point to staggering humanitarian consequences. Border Patrol Nation shows us in stark relief how the entire country has become a militarized border zone, with consequences that affect us all.

Todd Miller has worked on and written about US border issues for over fifteen years.

For the past fifteen years, Todd Miller has researched, written about, and worked on immigration and border issues from both sides of the U.S. Mexico divide for organizations such as BorderLinks, Witness for Peace, and NACLA. He did the brunt of this work in Tucson, Arizona and Oaxaca, Mexico, with stints in New York City. Between Tucson and the Buffalo/Niagara Falls region of New York state where he grew up, he has spent the majority of his life close to the U.S. international boundary, south and north. His writings about the border have appeared in the New York Times, TomDispatch, Mother Jones, The Nation, Al Jazeera English, and Salon among other places.
Loading...
or support indie stores by buying on