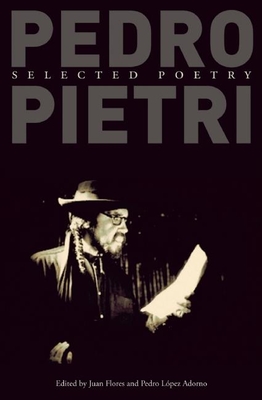 By turns angry, heartbreaking, and hopeful, his writings are imbued with a sense of pride and nationalism and were embraced by the generation of Latino poets that followed him. Pedro Pietri: Selected Poetry gathers the most enduring and treasured work among his published books, Puerto Rican Obituary, Traffic Violations, and Out of Order, along with a generous selection of his previously unpublished works.

There was no one in this country as ferocious, as brilliant, or as necessary as Pedro Pietri. In these days of growing inequality it is to his rebel vision I turn to for hope and for strength. A towering poet, absolutely peerless, explosively talented, a pioneer, and iconoclast, and activist, to whom the entire spoken word movement owes a debt beyond calculation.--Junot Diaz

One of the great American poets of the twentieth century, a leader of the Nuyorican poetry movement that ignited at Miguel Algar n's Nuyorican Poet's Cafe. Perhaps the most progressive and at the same time funniest poet of the period.--Amiri Baraka

Pedro Pietri (1944-2004) was born in Ponce, Puerto Rico, and raised in Manhattan. In the early '70s he was a featured poet at the Nuyorican Poets Cafe.

Juan Flores (1943-2014) was a professor and director of Latino Studies at New York University, and author of many books on Puerto Rican and Latino culture.

Pedro L pez Adorno is a professor in the Department of Africana and Puerto Rican/Latino Studies of Hunter College since 1987, and a published poet.

Pedro Pietri: Nuyorican poet and playwright Pedro Pietri was born in Ponce, Puerto Rico in 1944, and raised in Manhattan. In the early 1970s, he co-founded the Nuyorican Poets Cafe with Miguel Pinera, Miguel Algarin, and others. He died of stomach cancer in 2004.

Juan Flores: Juan Flores is a Professor of Social and Cultural Analysis and director of Latino Studies at New York University. He is the recipient of the Casa de las Americas Prize and the Smithsonian Institution Latino Legacy Award. His books include: From Bomba to Hip-Hop: Essays on Puerto Rican Identity published by Columbia University Press.

Pedro Lopez Adorno: Pedro Lopez Adorno, born, Puerto Rico, 1954. Author of 13 books. He has been a professor in the Department of Africana and Puetro Rican/Latino Studies of Hunter College since 1987.
Loading...
or support indie stores by buying on