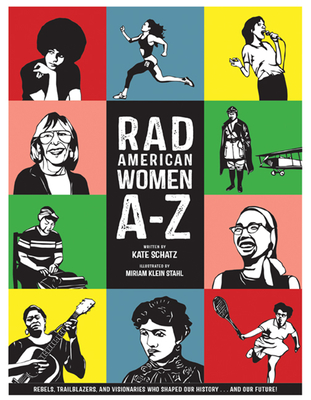 Rebels, Trailblazers, and Visionaries Who Shaped Our History . . . and Our Future! (City Lights/Sister Spit)

"This is The Most Inspiring Children's Book We've Ever Seen."--Refinery29.com

"The History of Feminism--in an Awesome Picture Book. The ABCs just got a major girl-power upgrade."--Chantal Strasburger, Teen Vogue

Like all A-Z books, this one illustrates the alphabet--but instead of "A is for Apple", A is for Angela--as in Angela Davis, the iconic political activist. B is for Billie Jean King, who shattered the glass ceiling of sports; C is for Carol Burnett, who defied assumptions about women in comedy; D is for Dolores Huerta, who organized farmworkers; and E is for Ella Baker, who mentored Dr. Martin Luther King and helped shape the Civil Rights Movement.

And the list of great women continues, spanning several centuries, multiple professions, and 26 diverse individuals. There are artists and abolitionists, scientists and suffragettes, rock stars and rabble-rousers, and agents of change of all kinds.

The book includes an introduction that discusses what it means to be "rad" and "radical," an afterword with 26 suggestions for how you can be "rad," and a Resource Guide with ideas for further learning and reading.

American history was made by countless rad--and often radical--women. By offering a fresh and diverse array of female role models, we can remind readers that there are many places to find inspiration, and that being smart and strong and brave is rad.

Rad American Women will be appreciated by various age groups. It is Common Core aligned for students grades 3 - 8. Pre-school and young children will be captured by the bright visuals and easily modified texts, while the subject matter will stimulate and inspire high-schoolers and beyond.

"This is not a book. This is a guest list for a party of my heroes. Thank you for inviting us." --Lemony Snicket, author of A Series of Unfortunate Events books

"I feel honored to be included in this book. Women need to take radical steps to become feminists, and to be strong to fight for their rights and those of others facing oppression and discrimination. The world needs rad women to create a just society." --Dolores Huerta, Labor Leader, Civil Rights Activist

"It's almost always with a chuckle that I view a cartoon image of myself. But to see cartoon-me positioned (alphabetically) amongst so many of my women heroes and role models . . . well, I just broke down and cried. Happy tears. I surely hope that this one-of-a-kind collection of radical American women reaches the hands of all children who want to grow up and become amazing women." --Kate Bornstein, author of My New Gender Workbook

"I was totally in rapture reading this book. Bold women, bold colors, and fierce black paper cutouts. I cheer these histories of women who fight not for war or country or corporation, but for EVERYONE I can't wait for my son to read this." --Nikki McClure, Illustrator of All in a Day

Kate Schatz is a writer, educator, public speaker, and activist. She is the author of the NYT bestselling Rad Women book series, including Rad American Women A-Z, Rad Women Worldwide, Rad Girls Can, and Rad American History A-Z. Her book of fiction, Rid of Me: A Story, was published in 2006 as part of the acclaimed 33 1/3 series. Her writing has been published in LENNY, Brightly, Buzzfeed, Oxford American, Denver Quarterly, and Joyland, among others, and her short story Folsom, Survivor was included as a 2010 Notable Short Story in Best American Short Stories 2011. She lives with her family on the island of Alameda. Miriam Klein Stahl is a Bay Area artist, educator and activist. In addition to her work in printmaking, drawing, sculpture, paper-cut and public art, she is also the co-founder of the Arts and Humanities Academy at Berkeley High School where she's taught since 1995. She illustrated the book Rad Women Worldwide. As an artist, she follows in a tradition of making socially relevant work, creating portraits of political activists, misfits, radicals and radical movements. As an educator, she has dedicated her teaching practice to address social inequity through the lens of the arts. Her work has been widely exhibited and reproduced internationally. She lives in Berkeley, California with her family.
Loading...
or support indie stores by buying on