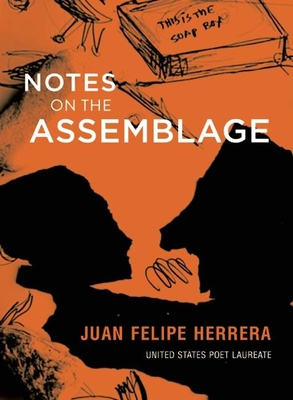 Notes on the Assemblage

Juan Felipe Herrera, the first Latino Poet Laureate of the United States and son of Mexican immigrants, grew up in the migrant fields of California.

Exuberant and socially engaged, reflective and healing, this collection of new work from the nation's first Latino Poet Laureate is brimming with the wide-open vision and hard-won wisdom of a poet whose life and creative arc have spanned chasms of culture in an endless crossing, dreaming and back again.

This year] Juan Felipe Herrera's Notes on the Assemblage has been a ladder of hope ...--Ada Lim n, The New Yorker

Juan Felipe Herrera's family has gone from migrant worker to poet laureate of the United States in one generation. One generation. I am an adamant objector to the Horatio Alger myth of pulling oneself up by the bootstraps, but Herrera's story is one of epic American proportions. The heads carved into my own Mount Rushm s would be Cesar Chavez, Dolores Huerta, Frida Kahlo, El Chapul n Colorado, Selena, and Juan Felipe Herrera. Notes from the Assemblage further carves out Herrera's place in American letters.--David Tomas Martinez

At home with field workers, wage slaves, the homeless, little children, old folks, artists, traditionalists, the avant-garde, students, scholars and prisoners, the bilingual Juan Felipe Herrera is the real thing: a populist treasure. He will fulfill his appointment as U.S. Poet Laureate with the same high energy, savvy, passion, compassion, commitment and playfulness that his art and life's have always embodied. Bravo Bravo --Al Young

While reporters can give you the what, when, and where of a war, a poet with the enormous gifts of Juan Herrera can give you its soul.--Ishmael Reed

I am proud that Juan Felipe Herrera has been appointed U.S. Poet Laureate, bringing his truthful, beautiful voice to all of us universally. As the first Chicano Laureate, he will empower all diverse cultures.--Janice Mirikitani

Herrera is ... a sometimes hermetic, wildly inventive, always unpredictable poet, whose work commands attention for its style alone ... Many poets since the 1960s have dreamed of a new hybrid art, part oral, part written, part English, part something else: an art grounded in ethnic identity, fueled by collective pride, yet irreducibly individual too. Many poets have tried to create such an art: Herrera is one of the first to succeed.--The New York Times

Herrera has the unusual capacity to write convincing political poems that are as personally felt as poems can be.--National Public Radio

Appointed as the U.S. Poet Laureate in 2015, Juan Felipe Herrera is the son of migrant farm workers, and was educated at UCLA and Stanford University, and received his MFA from the University of Iowa Writers' Workshop. His numerous poetry collections include 187 Reasons Mexicanos Can't Cross the Border: Undocuments 1971-2007, Half of the World in Light: New and Selected Poems (2008), and Border-Crosser with a Lamborghini Dream (1999). In addition to publishing more than a dozen collections of poetry, Herrera has written short stories, young adult novels, and children's literature. In 2012, Herrera was named California's poet laureate. He has won the Hungry Mind Award of Distinction, the Focal Award, two Latino Hall of Fame Poetry Awards, and a PEN West Poetry Award. His honors include the UC Berkeley Regent's Fellowship as well as fellowships from the National Endowment for the Arts, the Bread Loaf Writers' Conference, and the Stanford Chicano Fellows. He has also received several grants from the California Arts Council. Herrera is also a performance artist and activist on behalf of migrant and indigenous communities and at-risk youth. His creative work often crosses genres, including poetry opera and dance theater. His children's book, The Upside Down Boy (2000), was adapted into a musical. His books for children and young adults have won several awards, including Calling the Doves (2001), which won the Ezra Jack Keats Award, and Crashbomlove (1999), a novel-in-verse for young adults which won the Americas Award. His book Half The World in Light is a finalist for the National Book Critics Circle prize in 2009.