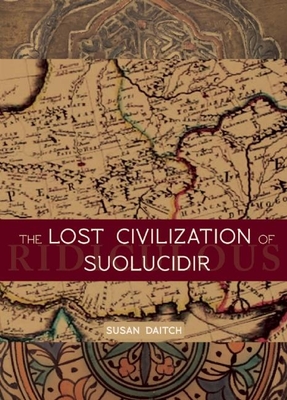 The Lost Civilization of Suolucidir (Paperback)

"With shades of Umberto Eco and Paul Auster, this brilliant, addictive adventure novel is about the search for a mythical lost city located somewhere in modern-day Iran. As a succession of explorers and shady characters dig deeper into the landscape, the ancient secret of Suolucidir is gradually revealed. This is brainy, escapist fiction at its best."--Publishers Weekly, Starred & Boxed Review

"The author's prose is rich with winking allusions and sendups of modern tomb-raiding tropes, down to an explorer with 'a long stiff braid down her back.'"--The New Yorker

"It's always a delight to discover a voice as original as Susan Daitch's."--Salman Rushdie

"One of the most intelligent and attentive writers at work in the US today."--David Foster Wallace

A series of archeological expeditions unfolds through time, each one looking for the ruins of a fabled underground city-state that once flourished in a remote province near the border of present-day Iran, Pakistan, and Afghanistan. Sealed off for centuries by seismic activity, Suolucidir beckons with the promise of plunder and the glory of discovery, fantasies as varied as the imaginations of her aspiring modern-day conquerors.

As the tumult of the twentieth century's great wars, imperial land grabs and anti-colonial revolutions swirl across its barren, deserted landscape, the ancient city remains entombed below the surface of the earth. A succession of adventurers, speculators and unsavory characters arrive in search of their prize, be it archeological treasure, oil, or evidence of crimes and punishments. Intrigue, conspiracies, and counter-plots abound, and contemporary events interfere with each expedition, whether in the form of the Axis advance, British Petroleum, or the Revolutionary Guards. People disappear, relics are stolen, and the city closes in upon itself once more.

A satiric, post-colonial adventure story of mythic proportions, The Lost Civilization of Suolucidir takes place against a background of actual events, in a part of the world with a particular historical relationship to Russia and the West. But though we are treated to visual "evidence" of its actual existence, Suolucidir remains a mystery, perhaps an invention of those who seek it, a place where history and identity are subject to revision, and the boundaries between East and West are anything but solid, reliable, or predictable.

Praise for The Lost Civilization of Suolucidir:

"Susan Daitch has written a literary barnburner of epic proportions. The question buried at the core of The Lost Civilization of Suolucidir is one of empirical--or is the imperial?--knowledge itself. Her labyrinthine tale of archeological derring-do calls to mind both 1984 and 2666, and does so by looking backward in time as well as forward. It is also utterly original, the work of a visionary writer with an artistic sensibility all her own."--Andrew Ervin, author of Burning Down George Orwell's House

"This is a novel of archeology and history, of mythology and empire, powered by an undeniable call to adventure and a deep yearning for understanding, written by a novelist who manages to surprise on nearly every page."--Matt Bell, author of Scrapper

"Daitch's latest is a beguiling and virtuoso companion to our inevitable end: a novel that wrenches, sentence by fine sentence, some order from the chaos, while never shortchanging the chaos itself."--Mark Doten, author of The Infernal

Susan Daitch is the author of four novels, "The Lost Civilization of Suolucidir" (with City Lights) "L.C.," "The Colorist," "Paper Conspiracies" (also with City Lights), and a collection of short stories, Storytown. Daitch's "White Lead: A Novel of Suspense" comes out in the fall of 2016. Her short fiction and essays have appeared in LitHub, Black Clock, Guernica, Conjunctions, Slice, Tablet, Tin House, McSweeney's, Bomb, Ploughshares, The Barcelona Review, failbetter, TriQuarterly, ReDivider, The Norton Anthology of Postmodern American Fiction, and elsewhere. She has been the recipient of a 2012 New York Foundation for the Arts Fellowship in Fiction, two Vogelstein fellowships. Fall Out, a novella, was published in June 2013 by Madras Press, all proceeds donated to Women For Afghan Women.
or support indie stores by buying on
Copyright © 2020 American Booksellers Association