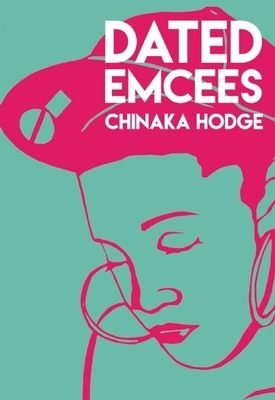 Chinaka Hodge came of age along with hip-hop--and its influence on her suitors became inextricable from their personal interactions. Form blends with content in Dated Emcees as she examines her love life through the lens of hip-hop's best known orators, characters, archetypes and songs, creating a new and inventive narrative about the music that shaped the craggy heart of a young woman poet, just as it also changed the global landscape of pop.

In the old tellings hip-hop was a woman, a certain kind--one needing, even begging to be saved. In Dated Emcees, Chinaka Hodge gives her a voice and she tells of her loves and desires, her traumas and pains in words as hard, as lit, as loving, cunning, cutting, ecstatic, as tender and devastating as her big world requires. This is poetry that, in its infinite power and intimate grace, will still turn in your mind long after the music is over.--Jeff Chang, author of Who We Be: A Cultural History of Race in Post-Civil Rights America

Hodge writes with an unpredictable, rare honesty. This collection quietly and simply illustrates love in a complicated world.--Donald Glover AKA Childish Gambino

"This is an absolute powerhouse of a book, and a new pinnacle for Chinaka Hodge. There's enough beauty and heartbreak and melancholy and humor and sorrow in here for three collections, or two lifetimes. Hodge's writing is so incredibly specific but somehow universal, so honest and raw but somehow polished to unimproveability. She deserves a wide audience, an attentive audience, an audience that wants to be astounded."--Dave Eggers, author of The Circle

Chinaka Hodge is hands down, unequivocally, my favorite writer of words. All day. Every day. She writes with the grace of a dancer, the bars of a rapper, the heart of your best friend, and all of the swag and soul of Oakland. Dated Emcees made me cry. And I don't really do that. It doesn't use Hip Hop as a lens. It is Hip Hop. In the way that we, who have grown up with rap as our brilliant, estranged, mythological, abusive lover/father/son, are all Hip Hop. Aware of his flaws, and his potential. And loving him unconditionally. These are poems to read every day. To make mantras from. They are the best poems you've ever read.--Daveed Diggs, Actor/Rapper, star of Hamilton on Broadway

Every time I hear new work from Chinaka Hodge I wonder if she was always this good. She was, I'm pretty sure. And yet somehow, she's leveled up again. Dated Emcees is a dropped microphone, and a direct challenge to anyone listening. Step your game up.--George Watsky, author of How to Ruin Everything: Essays

"Ms. Hodge's collection complicates dogmatic notions of feminist principles and hip hop pathologies. She is the steward of a candid and sonorous new form, a lyrical journalism expressed in a meter that climbs from West Oakland's Bottoms to the peak of a Wonder-laced rocket love. Dated Emcees is outlined in the matter of black life, streamlined through the filter of black womb ... a smoke-filled lung in a sweat-filled club of safety and danger, and the bass of black moon."--Marc Bamuthi Joseph, arts activist, spoken word artist, US Artists Rockefeller Fellow

Chinaka Hodge is a poet, educator, playwright and screenwriter. Originally from Oakland, California, she graduated from NYU's Gallatin School of Individualized Study in May of 2006, and was honored to be the student speaker at the 174th Commencement exercise. In 2010, Chinaka received USC's prestigious Annenberg Fellowship to continue her studies at its School of Cinematic Arts. She received her MFA in Writing for Film and TV in 2012. In the fall of that year, she received the SF Foundation's Phelan Literary Award for emerging Bay Area talent. Chinaka was also a 2012 Artist in Residence at The Headlands Center for the Arts in Marin, CA. In January 2013, Hodge was a Sundance Feature Film lab Fellow for her script, 700th∬'l. In June of 2013 Chinaka began as a first year fellow at Cave Canem's prestigious summer retreat. For over a decade, Hodge has worked in various capacities at Youth Speaks/The Living Word Project, the nation's leading literary arts non-profit. During her tenure there, Chinaka served as Program Director, Associate Artistic Director, and worked directly with Youth Speaks' core population as a teaching artist and poet mentor. She has acted in comparable capacities in New York and Los Angeles at Urban Word NYC and Get Lit: Words Ignite. When not educating or writing for the page, Chinaka rocks mics as a founding member of a collaborative Hip Hop ensemble, The Getback. Her poems, editorials, interviews and prose have been featured in Newsweek, San Francisco Magazine, Believer Magazine, PBS, NPR, CNN, C-Span, and in two seasons of HBO's Def Poetry.
Loading...
or support indie stores by buying on