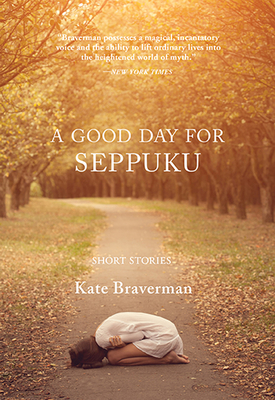 A Good Day for Seppuku

Haunting new stories about girls on the brink of adulthood, women on the verge of breakdowns, and families undone by past deceptions.

"Kate Braverman is a writer of astonishing versatility and lyricism. Her stories are brilliantly rendered, painfully intimate portraits of individuals who come alive on the page as if illuminated by strobe lighting. With remarkable precision she tracks the restless motions of a mind searching for its reflection in the world--a continuous interrogation of the self that sweeps us along with it, as in a mysterious adventure."--Joyce Carol Oates

"If fame did not find Braverman when the moment was right, perhaps it will make amends now that the moment is wrong. . . . Braverman excels at flooding readers in images that throb with menace or pleasure, as if descriptive language were a vein into which our most primal fears and desires could be injected."--Katy Waldman, The New Yorker

"Braverman writes forthright but beautiful sentences. Her details are so vivid that they feel like memories . . . "--Publishers Weekly, *Starred/Boxed review

"Kate Braverman is an original. Reading her is like hitching a ride on a runaway train, always dangerous, always thrilling, always a knockout. Seppuku is all that and more."--Frederick Barthelme, author of There Must Be Some Mistake

"Braverman is the godmother of literary bad girls and a connoisseur of the shattered beauty glittering in the wreckage of her characters' lives. A Good Day for Seppuku celebrates the Braverman vision, and frames her legacy."--Janet Fitch, author of The Revolution of Marina M.

A thirteen-year-old girl must choose between her mother in Beverly Hills or her pot-growing father in the Allegheny Mountains. Dr. Bernie Roth and his wife Chloe reside in a grand hacienda in La Jolla. Their children are in college, and their disappointments are profound. But Bernie has his doctor's bag of elixirs for the regrets of late middle age. Mrs. Barbara Stein, a high school teacher, looks like she'd sacrifice her life for Emily Dickinson's honor. That's camouflage. Mrs. Stein actually spends summers in the Sisyphean search for her prostitute daughter in Los Angeles.

These are some of the tales told in Kate Braverman's audacious new story collection. These furious and often hilarious tableaus of American family life remind us of why she has been seducing readers ever since her debut novel Lithium for Medea shook the literary world nearly forty years ago.

Kate Braverman (1950-2019) was the author of numerous books including the memoir Frantic Transmissions to and from Los Angeles, the novel Lithium for Medea, the story collection A Good Day for Seppuku, published by City Lights, and more. She was the recipient of the Economist Prize, an Isherwood Fellowship, and the O'Henry Award. Her classic short fiction has appeared in New American Short Stories (edited by Ben Marcus), The Vintage Book of Contemporary American Short Stories (edited by Tobias Wolff), McSweeney's, Best American, Carver, The Paris Review, and other esteemed anthologies and award-winning collections.
Loading...
or support indie stores by buying on