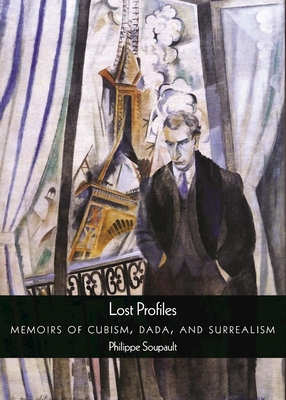 Memoirs of Cubism, Dada, and Surrealism

A retrospective of crucial periods in modernism via portraits of its literary lions by the co-founder of the Surrealist Movement.

Poet Alan Bernheimer provides a long overdue English translation of this French literary classic. Opening with a reminiscence of the international Dada movement in the late 1910s and its transformation into the beginnings of surrealism, Lost Profiles then proceeds to usher its readers into encounters with a variety of literary lions. We meet an elegant Marcel Proust, renting five adjoining rooms at an expensive hotel to "contain" the silence needed to produce Remembrance of Things Past; an exhausted James Joyce putting himself through grueling translation sessions for Finnegans Wake; and an enigmatic Apollinaire in search of the ultimate objet trouv . Soupault sketches lively portraits of surrealist precursors like Pierre Reverdy and Blaise Cendrars, a moving account of his tragic fellow surrealist Ren Crevel, and the story of his unlikely friendship with right-wing anti-Vichy critic George Bernanos. The collection ends with essays on two modernist forerunners, Charles Baudelaire and Henri Rousseau. With an afterword by Ron Padgett recounting his meeting with Soupault in the mid 70's and a preface by Andr Breton biographer Mark Polizzotti, Lost Profiles confirms Soupault's place in the vanguard of twentieth-century literature.

"Philippe Soupault was a central figure in both the Dada and Surrealist movements but throughout his long life walked under no banner except the one of artistic freedom. In this previously untranslated book, he gives us a collection of richly remembered portraits of some of his best-loved friends from the old days of the new modernism. As a glimpse into that time, these lost portraits are invaluable--and often deeply moving."--Paul Auster, author of Report from the Interior

"Reading Alan Bernheimer's splendid translation of Soupault's memoir, I forgot that it was a translation, that it was Soupault writing or talking about another time, about his friends of one century past. I read myself into these vivid and virile (so, sue me ) assaults on time, and Time stopped."--Andrei Codrescu, author of The Posthuman Dada Guide: Tzara and Lenin Play Chess

"Philippe Soupault was present at the creation of both Dada and Surrealism--collaborating with Andr Breton to produce The Magnetic Fields, the first book of automatic writing--before going his own way as a poet, novelist, and journalist. In this present volume, Soupault's fierce independence, deep wit, and generous heart shine through a set of sharply observed portraits of European writers--fellow geniuses, most of them known to him personally. Alan Bernheimer's fine translation allows Soupault's vibrant voice to come to life in our time, and to reanimate in turn some of the greatest spirits of the past century's literature--a marvelous and much-needed apparition."--Andrew Joron, author of Trance Archive: New and Selected Poems

"In this dazzling book--adroitly, smoothly & accurately translated by poet Alan Bernheimer--poet & co-founder of Surrealism Philippe Soupault trains his great secret eye & ear to auscultate an astounding range of core 20th century literary figures he knew personally. And does so with serenity, humor & profound insight. Like none of the academic histories covering this period, no matter how well written and documented, this book makes you say as you devour it: 'Wish I had been there.' Enough said, I'm going to call Ren Crevel right now."--Pierre Joris, author of Barzakh: Poems 2000-2012