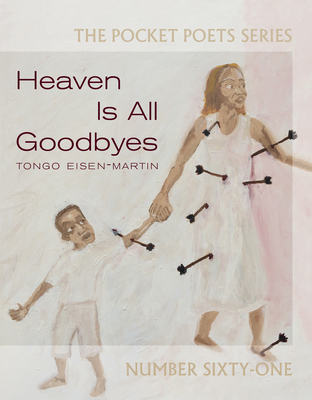 Heaven Is All Goodbyes

Winner of the 2018 California Book Award for Poetry

2018 NCIBA Poetry Book of the Year

"Eisen-Martin's impeccable collection is a crucial document of this time."--Publishers Weekly, starred review

This is truly revolutionary poetry. A vortex of images, observations, inspired leaps and free associations spills forth from a choir living in oppression and transience. Moments of political and spiritual convergence, surrealism and blunt materiality, gangsterism and its husk, revolution and perseverance, are captured in the music of metaphor and pure intention.

Praise for Heaven Is All Goodbyes

"The tesseraic language of Tongo Eisen Martin's Heaven Is All Goodbyes brings a new, shared articulation to the intricacies and interconnections of grief and life, speech and site, state and inhabitant, violence and landscape. Here, polyvocal assemblages gather and revolt against our 'porcelain epoch / succeeding for the most part / dying for the most part / married for the most part to its death.' This is resistance as sound."--Claudia Rankine

"I don't know that there is a living writer whose work loves Black people as much as Tongo Eisen-Martin's work loves us. In Heaven Is All Goodbyes, like all of Eisen-Martin's work, this Black love is not clumsy, easy, sentimental or reliant on spectacle. That Black love lives in the cracked history and ambient future of who we've been in dark, and what's been done to us in the light. These poems somehow watch and listen without intervening. And when they ask, they ask everything. Heaven Is All Goodbyes makes me want to live, and write, with us forever."--Kiese Laymon, author of Long Division

"What a wonderful feeling for life. If we are born--we will die. If we love--we will be rejected. If we are rejected--we will leave. The balance of these poems, one against another, gives us laughter, love and hope. Heaven isn't Goodbye--its only the next stop on our heart's journey."--Nikki Giovanni

"Yet again Tongo Eisen-Martin employs his blade sharp intellect, his wry and piercing wit and unflinching candor to make poems that matter. This collection demands that the reader sees more than themselves--both on the page and in the surrounding world. The poems beg to be read aloud, to be pronounced as spells and incantations, as report backs from communities both known and shrouded. Read this work. Then read it again. Again. Again."--Chinaka Hodge, author of Dated Emcees

"This striking new work from Tongo Eisen-Martin is a timely reminder of Amiri Baraka's call for poems that are useful, poems that breathe like wrestlers. At every turn, Heaven Is All Goodbyes demands that we engage the systemic violence woven into our daily living right alongside the persistent force that is black social life, the joy that everyday people cultivate against unthinkable odds. And even though Eisen-Martin grounds us, necessarily, in the material constraints of the modern world, he doesn't leave us there. He calls us elsewhere. He brings us with him into a robust, illuminating vision of the worlds that exist outside and underneath the one that seeks to curtail our liberation, contain our love. This is work that challenges as it lifts. These are the unabashed abolitionist lyrics of a writer who knows that stakes are high and so is the cost of conceding our most radical dreams. In a moment marked by cynicism and disenchantment, Eisen-Martin remains a believer: in the commons, in collective struggle, in our capacity to flourish in the midst of what we were never meant to survive."--Joshua Bennett, author of The Sobbing School

Tongo Eisen-Martin is the author of Heaven Is All Goodbyes (City Lights Books, 2017) and someone's dead already (Bootstrap Press, 2015) and his poetry has been featured in Harper's and New York Times Magazine. Heaven Is All Goodbyes was shortlisted for the Griffin International Poetry Prize and awarded the California Book Award for Poetry, an American Book Award, and a PEN Oakland Book Award. He is also a movement worker and educator whose work in Rikers Island was featured in the New York Times. He has been a faculty member at the Institute for Research in African-American Studies at Columbia University, and his curriculum on the extrajudicial killing of Black people, "We Charge Genocide Again!" has been used as an educational and organizing tool throughout the country. He's from San Francisco.
Loading...
or support indie stores by buying on