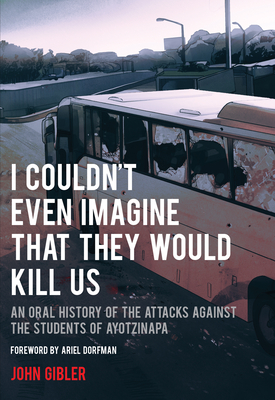 I Couldn't Even Imagine That They Would Kill Us

Chosen as a Best Book of 2017 by Publishers Weekly

Harrowing personal narratives describing how Mexican authorities disappeared, killed, and injured scores of students and others in a still-unsolved crime.

Journalist Gibler's investigative prowess yields a book that uses a chorus of voices--eyewitness accounts of the students and others at the scene--to add depth and clarity to the Sept. 26, 2014, massacre of students in the city of Iguala, Mexico, that left six people dead, 40 wounded, and 43 students missing who have yet to be seen since. It's an unforgettable reconstruction of a national tragedy.--Publishers Weekly, Best of 2017, Nonfiction

After nine months of intensive research for a book on the case of the forty-three, Gibler decided that 'what needs to be shared, urgently, are both the words and the storytelling of the people who lived through the attacks.' . . . The testimonies in I Couldn't Even Imagine That They Would Kill Us offer stunning evidence again and again that members of the army, as well as local and state police, helped carry out the attack.--The New York Review of Books

In Mexico, John Gibler's book has been recognized as a journalistic masterpiece, an instant classic, and the most powerful indictment available of the devastating state crime committed against the 43 disappeared Ayotzinapa students in Iguala. This meticulous, choral recreation of the events of that night is brilliantly vivid and alive, it will terrify and inspire you and shatter your heart.--Francisco Goldman, writer for The New Yorker, author of The Interior Circuit: A Mexico City Chronicle

On September 26, 2014, police in Iguala, Mexico attacked five busloads of students and a soccer team, killing six people and abducting forty-three students--now known as the Iguala 43--who have not been seen since. In a coordinated cover-up of the government's role in the massacre and forced disappearance, Mexican authorities tampered with evidence, tortured detainees, and thwarted international investigations. Within days of the atrocities, John Gibler traveled to the region and began reporting from the scene. Here he weaves the stories of survivors, eyewitnesses, and the parents of the disappeared into a tour de force of journalism, a heartbreaking account of events that reads with the momentum of a novel. A vital counter-narrative to state violence and impunity, the stories also offer a testament of hope from people who continue to demand accountability and justice.

John Gibler lives and writes in Mexico. He is the author of Torn from the World, Mexico Unconquered: Chronicles of Power and Revolt, To Die in Mexico: Dispatches From Inside the Drug War, 20 poemas para ser le dos en una balacera, Tzompaxtle: La fuga de un guerrillero. His work on Ayotzinapa has been published in California Sunday Magazine, featured on NPR's All Things Considered, and praised by The New Yorker.