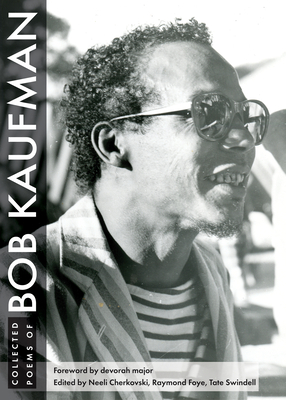 The Collected Poems of Bob Kaufman is the most comprehensive selection of his verse to date, a volume that contains a lot of previously uncollected work. ... this book makes a case for him as a perceptive and eccentric American original, a man who seems to have fallen out of the sky like a meteor.--The New York Times

The body of work is small but voluminous in intensity, spirit and soul, with a lineage that runs from Charles Baudelaire to Charles Mingus. Kaufman--with his commitment to the art, his surreal eye on the urban experience and beyond it, and his jazz timing--brings San Francisco to life.--San Francisco Chronicle

Twentieth-century American poetry cannot be fully comprehended without Bob Kaufman. City Lights and the editors do a grand service to literature by publishing Kaufman's poetry in one collection. ... This is a necessary gift for poets and poetry readers.--Booklist

Bob Kaufman (1925-1986) was one of the most important--and most original--poets of the twentieth century. He is among the inaugurators of what today is characterized as the Afro-Surreal, uniting the surrealist practice of automatic writing with the jazz concept of spontaneous composition. He seldom wrote his poems down and often discarded those he did, leaving them to be rescued by others. He was also a legendary figure of the Beat Generation, known as much for hopping on tables to declaim his poetry as for maintaining a monastic silence for months or even years at a time.

Kaufman produced just three broadsides and three books in his lifetime. In 1967, Golden Sardine was published by City Lights in its famed Pocket Poets Series, and became an instant cult classic. Collected Poems is a landmark poetic achievement, bringing together all of Kaufman's known surviving poems, including an extensive section of previously uncollected work, in a long overdue return to City Lights Books.

Bob Kaufman volcanically en-veined the Beats as a mirage enveloped Surrealist; not as a formal poet, but one, like Rimbaud, who embodied butane. Following the scent of his butane on one anonymous North Beach afternoon led Philip Lamantia to audibly utter to me that Bob Kaufman as per incandescent singularity is 'our poet.'--Will Alexander, author of Compression & Purity

Bob Kaufman is one of our most vulnerable, mysterious, and beautiful poets, a nomadic maudit, surrealist saint of the streets, votary of silence, the consummate Outrider with trickster imagination and visionary power."--Anne Waldman, author of Trickster Feminism

Uplifting the voice of this under-sung literary master to future's light is the mission of the Collected Poems of Bob Kaufman. This poet's poet on the cliff edge of no ledge is still continuing to foster new surrealizations. Read this bebopian wordsmith, his pen turned saxophone and ink notes that are black tears.--Kamau Da ood, author of The Language of Saxophones

To call these poems 'surreal' seems, now, to muffle Kaufman's prophetic genius. He saw us, our images in pools of blood, milk, and saxophone spittle. Maybe it was ever our shivering made the ripples that distorted the reflections.--Douglas Kearney, author of Buck Studies

Collected Poems of Bob Kaufman should finally liberate the kaleidoscopic surrealism of this San Franciscan, and in many respects, secular Franciscan, poet from the shadows of Allen Ginsberg and the other Beats. ... Collected Poems is a memoriam of unmitigated joy and abysmal despair.--Tyrone Williams, author of As iZ

Bob Kaufman was born in New Orleans in 1925 and spent the 1940s in the Merchant Marine. After a brief period as a labor organizer, he lived a peripatetic existence before settling in San Francisco in the late '50s, where he published three broadsides with City Lights Books. In 1959, he co-founded Beatitude magazine and maintained a decade-long vow of silence after the assassination of President Kennedy. He published two books during the 1960s, Solitudes Crowded with Loneliness and Golden Sardine, and a third book, The Ancient Rain, in 1981. He died in San Francisco in 1986. He is considered by many to be the finest jazz poet of his generation.Neeli Cherkovski was born in Los Angeles. He is the author of many books of poetry, including Animal (1996), From the Canyon Outward (2009), The Crow and I (2015), and Elegy for My Beat Generation (2018). He is the coeditor of Anthology of L.A. Poets (with Charles Bukowski) and Cross-Strokes: Poetry Between Los Angeles and San Francisco (with Bill Mohr). He has also published editions of his poems in Austria, Mexico, Italy, Germany, and Turkey.Raymond Foye is a writer, curator, and editor based in New York City. He is the executor for the poets John Wieners, James Schuyler, and Rene Ricard, and has edited numerous editions of their works. Currently he is preparing an edition of the final unpublished poems of Gregory Corso from the years 1980-2000. He is also the publisher of Raymond Foye Books.Tate Swindell is the founder of Unrequited Records, which specializes in poetry records released in vinyl format. His collections of writing include Palpitations, Tearing Down Walls of Cellars and Basements, and The Creation of Deadlines. Tate, and his brother Todd, worked extensively on the Harold Norse archives, which were donated to the Bancroft Library at UC Berkeley. He is currently working on an album of rare Gregory Corso readings from the late 1970s and early 80s that includes previously unpublished poems.devorah major served as San Francisco's Third Poet Laureate (2002-2006). She has published two novels, four poetry books, and four poetry chapbooks, along with two young adult titles, and a host of short stories, essays, and individual poems published in anthologies and periodicals. Among her awards is a First Novelist award from the Black Caucus of the ALA and a PEN Oakland Josephine Miles Literary Award. She is a Senior Adjunct Professor at California College of the Arts.
Loading...
or support indie stores by buying on