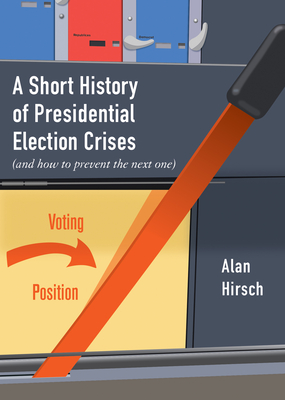 (and How to Prevent the Next One) (City Lights Open Media)

What if, on account of the Coronavirus, we attempt to hold the 2020 presidential election entirely on-line or through the mail, and it turns into a logistical nightmare?

What if hackers succeed in changing votes from one candidate to another, calling into question the accuracy of the electoral count?

And, what happens if our current president doesn't accept election day results if he's not declared the winner?

In 2000, we learned that an exceptionally close presidential election can produce chaos, because we have no reliable Constitutional mechanism for resolving disputes. Since 2016, we have learned that foreign countries--and perhaps other malevolent actors--have been covertly attacking U.S. election systems. In the age of hacking, our elections are more vulnerable than ever, and yet we have failed to adequately prepare for all possible scenarios. It is time for us to think about how we can prevent and/or deal with disaster before it strikes.

In A Short History, Constitutional scholar Alan Hirsch addresses these issues with urgency and precision. He presents a concise history of presidential elections that resulted in crises and advocates clear, common-sense solutions, including abolishing the Electoral College and the creation of a permanent, non-partisan Presidential Election Review Board to prevent or remedy future crises.

" . . . seminal work of meticulous and informative scholarship that should be considered as an essential and unreservedly recommended addition to community, college, and university library Contemporary Political Science collections. It should be noted for the personal reading lists of students, academia, political activists, and non-specialist general readers with an interest in the subject . . . "--Midwest Library Review

"The noted law historian, author of Impeaching the President, examines the handful of seriously problematic presidential elections in American history and what the Constitution elucidates about the process of undoing such an event--namely, nothing. . . . A highly relevant study featuring much food for thought and prospects for change."--Kirkus Reviews, Starred Review

"Democracy is broken, but as Alan Hirsch explains, it really doesn't have to be. This is the real story of how our voting system became so vulnerable to attacks from within and without, told with precision, verve, and even hope. This is the way out."--Douglas Rushkoff, author of Team Human

"Hirsch does a very good job of offering historical context to illuminate the present--and the terrifying future. His imaginative proposals are probably too sensible to be implemented in an age of parochial partisanship."--David Shipler, former reporter for the New York Times and Pulitzer Prize winner

"This is a must-read for anyone who cares about safeguarding presidential elections ―which should be everyone. The time to read this book and pay attention is now."--Evan Caminker, Professor and former Dean, University of Michigan Law School

Alan Hirsch, Instructor in the Humanities and Chair of the Justice and Law Studies program at Williams College, is the author of a number of books including Impeaching the President: Past, Present, and Future (City Lights) and For the People: What the Constitution Really Says About Your Rights (Free Press) (coauthored with Akhil Amar). He received a J.D. from Yale Law School and B.A. from Amherst College. His work has appeared in the Washington Post, Los Angeles Times, Washington Times, Newsday, and the Village Voice. Hirsch also serves as a trial consultant and expert witness on interrogations and criminal confessions, testifying around the nation.
or support indie stores by buying on
Copyright © 2020 American Booksellers Association