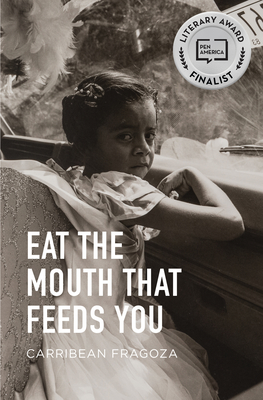 Eat the Mouth That Feeds You

Carribean Fragoza's debut collection of stories reside in the domestic surreal, featuring an unusual gathering of Latinx and Chicanx voices from both sides of the U.S./Mexico border, and universes beyond.

Carribean Fragoza's imperfect characters are drawn with a sympathetic tenderness as they struggle against circumstances and conditions designed to defeat them. A young woman returns home from college, only to pick up exactly where she left off: a smart girl in a rundown town with no future. A mother reflects on the pain and pleasures of being inexorably consumed by her small daughter, whose penchant for ingesting grandma's letters has extended to taking bites of her actual flesh. A brother and sister watch anxiously as their distraught mother takes an ax to their old furniture, and then to the backyard fence, until finally she attacks the family's beloved lime tree.

Victories are excavated from the rubble of personal hardship, and women's wisdom is brutally forged from the violence of history that continues to unfold on both sides of the US-Mexico border.

"Eat the Mouth That Feeds You is an accomplished debut with language that has the potential to affect the reader on a visceral level, a rare and significant achievement from a forceful new voice in American literature."--Kali Fajardo-Anstine, New York Times Book Review, and author of Sabrina and Corina

"Eat the Mouth that Feeds You renders the feminine grotesque at its finest."--Myriam Gurba, author of Mean

"Eat the Mouth that Feeds You will establish Fragoza as an essential and important new voice in American fiction."--H ctor Tobar, author of The Barbarian Nurseries

"Fierce and feminist, Eat the Mouth That Feeds You is a soul-quaking literary force."--Dontan McPherson-Joseph, The Foreword, *Starred Review

". . . a work of power and a darkly brilliant talisman that enlarges in necessary ways the feminist, Latinx, and Chicanx canons."--Wendy Ortiz, Alta Magazine

"Fragoza's surreal and gothic stories, focused on Latinx, Chicanx, and immigrant women's voices, are sure to surprise and move readers."--Zoe Ruiz, The Millions

"This collection of visceral, often bone-chilling stories centers the liminal world of Latinos in Southern California while fraying reality at its edges. Full of horror and wonder."--Kirkus Reviews, *Starred Review

"The magic realism of Eat the Mouth that Feeds You is thoroughly worked into the fabric of the stories themselves . . . a wonderful debut."--Brian Evenson, author of Song for the Unraveling of the World

The daughter of Mexican immigrants, Carribean Fragoza was raised in South El Monte, California. After graduating from UCLA, Fragoza completed the Creative Writing MFA Program at CalArts, where she worked with writers Douglas Kearney and Norman Klein. Fragoza is founder of Vicious Ladies, a new website publishing womxn, queer, and non-binary critics of color. She co-edits UC Press's acclaimed California cultural journal, Boom California, and is also the founder of South El Monte Arts Posse, an interdisciplinary arts collective.Her fiction and nonfiction have appeared in numerous publications, including Zyzzyva, Alta, BOMB, Huizache, and the Los Angeles Review of Books. She is the co-editor of East of East: The Making of Greater El Monte and Senior Writer at the Tropics of Meta. Carribean is the Coordinator of the Kingsley and Kate Tufts Poetry Award at Claremont Graduate University, and she lives in the San Gabriel Valley in LA County.
Loading...
or support indie stores by buying on