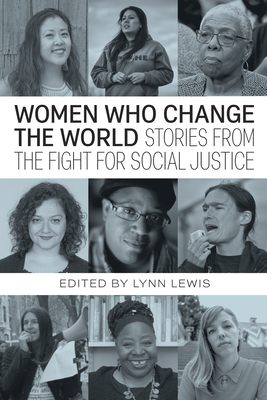 Women Who Change the World

Award-winning oral historian Lynn Lewis brings together the stories of nine exceptional women, from their earliest formative experiences to their current strategies as movement leaders, organizers, and cultural workers. Each chapter is dedicated to one activist--Malkia Devich-Cyril, Priscilla Gonzalez, Terese Howard, Hilary Moore, Vanessa Nosie, Roz Pelles, Loretta Ross, Yomara Velez, and Betty Yu. Reflecting upon the path their lives have taken, they talk about their struggles and aspirations, insights and victories, and what keeps them in the fight for a better world.

The life stories of these inspiring women reveal the many ways the experience of injustice can catalyze resistance and a commitment to making change. They demonstrate how the relationships and bonds of collective struggle for the common good not only win justice, but create hope, love, and joy.

Lynn Lewis (editor) is an oral historian, educator, and community organizer. She is the author of Love and Collective Resistance: Lessons from the Picture the Homeless Oral History Project and is the former executive director and past civil rights organizer at Picture the Homeless. Lewis is the recipient of many honors and awards, including a 2022/2023 National Endowment for the Humanities Oral History Fellowship. She lives in New York City. Malkia Devich-Cyril (interviewee) is the founding director of the Media Justice, and co-founder of the Media Action Grassroots Network. Raised in New York City, Devich-Cyril now lives in Oakland, California. Priscilla Gonzalez (interviewee) currently serves as the Program Director at the Center for Empowered Politics, a practitioner-led movement capacity organizations that trains and develops new leaders of color. Gonzalez now lives in West Texas. Terese Howard (interviewee) is the founder of the former Denver Homeless Out Loud (DHOL), which was formed to defend the rights of people without housing targeted by the police. She is also the founder of Housekeys Action Network Denver focused on housing as a human right, and lives in Denver. Hilary Moore (interviewee) was an environmental justice organizer with Rising Tide and Mobilization for Climate Justice West. She now works for Showing Up for Racial Justice, and lives in Louisville, Kentucky. Vanessa Nosie (interviewee) is a member of Apache Stronghold, a partner of the Poor People's Campaign: A National Call for Moral Revival. Roz Pelles (interviewee) is currently the Strategic Advisor to the Poor Peoples Campaign: A National Call for Moral Revival. Born and raised in Winston-Salem, North Carolina, Pelles currently resides in Silver Spring, Maryland. Loretta Ross (interviewee) has co-founded several groundbreaking organizations, coalitions, and formations with a Black feminist lens to ensure the inclusion of a radical Black women's perspective in feminist discourse. She teaches at Smith College in the Program for the Study of Women and Gender and curates the Feminist Oral History Project. Ross's latest book is Calling in the Calling Out Culture, and she resides in Holyoke, Massachusetts. Yomara Velez (interviewee) currently works with the National Domestic Workers Alliance, supporting the development of local organizing chapters across the U.S. Yomara was born in Massachusetts and grew up in Miami, Puerto Rico, Venezuela, and the Bronx where she spent many years organizing. She currently lives in Atlanta, Georgia. Betty Yu (interviewee) is a co-founder of Chinatown Art Brigade, a cultural collective using art to advance anti-gentrification organizing, and teaches video, social practice, art and activism at Pratt Institute, Hunter College, and The New School. Betty was born and raised in New York City, and grew up in Sunset Park, Brooklyn, where she lives today.
Loading...
or support indie stores by buying on