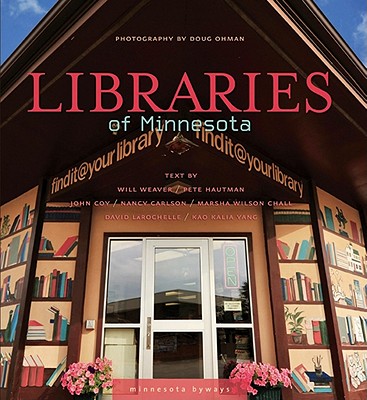 From cozy structures near small-town parks to impressive buildings in metropolitan downtowns, public libraries stand at the center of community and learning in Minnesota’s landscape. Libraries of Minnesota celebrates these architectural icons and the joy of reading they have inspired in Minnesotans, present and past.

Doug Ohman, well known as the photographer for the Minnesota Byways series, now turns his camera to this most beloved institution. Over 120 exquisite interior and exterior shots exhibit a colorful survey of architecture, from a renovated liquor store to Carnegie libraries to the newest and most wired of information centers.

In powerful, funny, and heartfelt essays, seven of Minnesota’s best-known writers for children and young adults testify to the special significance of libraries in their lives. Will Weaver sneaked five miles into town on his bicycle to visit the library when he should have been trapping gophers. Pete Hautman’s mom hauled her seven kids to multiple libraries, “like a shepherd rotating sheep from one pasture to the next.” David LaRochelle, facing the frightening prospect of junior high, found escape in the Pirate’s Treasure Hunt summer reading club. John Coy, Nancy Carlson, Marsha Wilson Chall, and Kao Kalia Yang tell similar
timeless stories of young people as they discover, on the shelves of local libraries, the world and all its wonders.

Photographer Doug Ohman’s work is featured in the Minnesota Byways series, which includes Barns of Minnesota and Cabins of Minnesota, as well as in the recent Prairie, Lake, Forest: Minnesota’s State Parks.