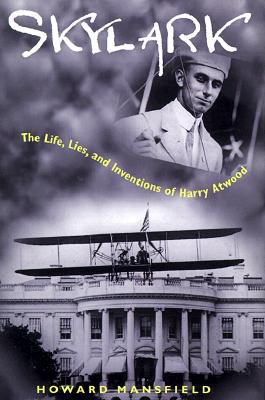 Harry Atwood was among the most flamboyant of the celebrated and often foolhardy pioneers of American aviation. Part daredevil, inventor, entrepreneur, and con artist, he became renowned for his flying feats, his plans for a bewildering variety of aircraft, an his ability to inspire otherwise sensible Yankees to invest enormous time and money in his invariably ill-fated projects.
As part of the early circle around Wilbur and Orville Wright, Atwood set many of the early US flying records and was constantly in the headlines for two decades after 1910. He built his own airplanes and developed imaginative but never-quite-realized plans for flying wings, Navy seaplanes that would carry immense cargoes, and cheap one-person planes that would be made from a single birch tree. His is a classic American story about riding the wave of enthusiasm in an era of technological progress while "selling blue-sky" to an eager and gullible public. Atwood's biography describes a larger than life individual, whose personal life was as complex and bizarre as his professional escapades, during the vibrant and innocent years when the sky no longer was the limit

Growing up on Long Island, HOWARD MANSFIELD used to fly with his father in a small single engine airplane. As part of his research for this book he took hang-gliding lessons. Author of The Same Ax, Twice: Restoration and Renewal in a Throwaway Age (2000), In the Memory House (1993), and Cosmopolis (1990), he lives in Hancock, New Hampshire.
Loading...
or
Not Currently Available for Direct Purchase