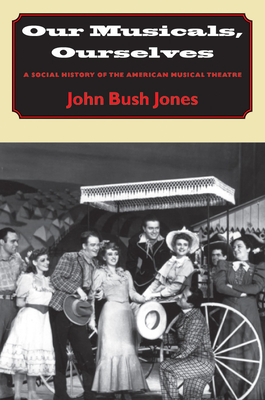 Our Musicals, Ourselves (Paperback)

A Social History of the American Musical Theatre

Our Musicals, Ourselves is the first full-scale social history of the American musical theater from the imported Gilbert and Sullivan comic operas of the late nineteenth century to such recent musicals as The Producers and Urinetown. While many aficionados of the Broadway musical associate it with wonderful, diversionary shows like The Music Man or My Fair Lady, John Bush Jones instead selects musicals for their social relevance and the extent to which they engage, directly or metaphorically, contemporary politics and culture. Organized chronologically, with some liberties taken to keep together similarly themed musicals, Jones examines dozens of Broadway shows from the beginning of the twentieth century to the present that demonstrate numerous links between what played on Broadway and what played on newspapers’ front pages across our nation. He reviews the productions, lyrics, staging, and casts from the lesser-known early musicals (the “gunboat” musicals of the Teddy Roosevelt era and the “Cinderella shows” and “leisure time musicals” of the 1920s) and continues his analysis with better-known shows including Showboat, Porgy and Bess, Oklahoma, South Pacific, West Side Story, Cabaret, Hair, Company, A Chorus Line, and many others. While most examinations of the American musical focus on specific shows or emphasize the development of the musical as an art form, Jones’s book uses musicals as a way of illuminating broader social and cultural themes of the times. With six appendixes detailing the long-running diversionary musicals and a foreword by Sheldon Harnick, the lyricist of Fiddler on the Roof, Jones’s comprehensive social history will appeal to both students and fans of Broadway.

JOHN BUSH JONES is a retired Professor of Theater Arts at Brandeis University. He has written theater criticism for numerous journals and newspapers, including the Boston Phoenix, the Kansas City Star, the Boston Herald, and the New England Theater Journal. He has directed dozens of musicals in professional, community, and university theaters.
or support indie stores by buying on
Copyright © 2020 American Booksellers Association