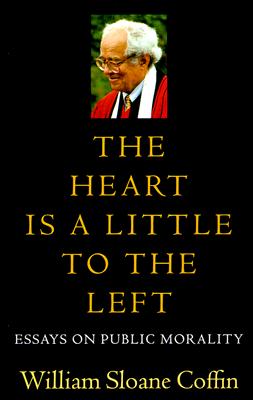 The Heart Is a Little to the Left

William Sloane Coffin offers here a powerful antidote to the politics of the religious right with a clarion call to passive intellectuals and dispirited liberals to reenter the fray with an unabashedly Christian view of social justice. Refusing to cede the battlefield of morality to conservatives, he argues that "compassion demands confrontation," as he considers such topics as homophobia, diversity, nuclear weapons, and civil discourse.
Coffin became famous while chaplain at Yale in the 1960s for his active opposition to the Vietnam War. Jailed as a civil rights "Freedom Rider," indicted by the government in the Benjamin Spock conspiracy trial, he attained popular immortality as Reverend Sloan in the Doonesbury comic strip. The seven pieces collected here are peppered with memorable aphorisms and pithy, political one-liners meant to turn bitterness to anger and anger to action.

WILLIAM SLOANE COFFIN (1924 2006) served for 18 years as chaplain of Yale University, was senior minister of Riverside Church, and was president emeritus of SANE/FREEZE: Campaign for Global Security. His books include Once to Every Man: An Autobiography, The Courage to Love, Living the Truth in a World of Illusions, and A Passion for the Possible.
Loading...
or
Not Currently Available for Direct Purchase