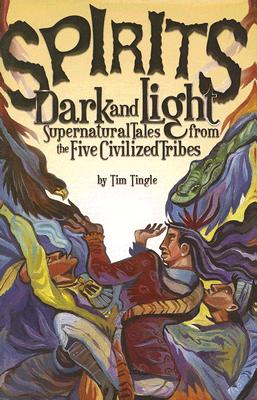 Book of the Year in the Popular Culture category Finalist and Storytelling World Award WinnerIn the Native American tradition, a strong connection exists between the spirit world and the natural world. What happens in one has direct and often reciprocal impact on the other. In this collection, Choctaw storyteller Tim Tingle draws from the rich heritage of the Five Civilized Tribes - the Creek, Cherokee, Chickasaw, Choctaw, and Seminole nations - and brings tales from the spirit world into our world. These spine-tingling stories not only entertain but provide a window into the native customs and beliefs of these still-vital communities. In "Eagle Slayer," calamity befalls a Cherokee village when one member violates tradition. The Seminole story "Hungry for Meat" illustrates the premium the once-migratory people place on respecting the remains of the dead - and the penalty for doing otherwise. And the Creek story "Two Friends" takes a horrifying twist on the teaching that we be true to ourselves: trying to be something else violates the natural order and brings a lifetime of pain and isolation. Owls, rabbits, deer, eagles - all of these spirits and more are here, shifting shapes in dizzying sequence and illuminating the values, beliefs, hopes and fears still embraced by the Five Civilized Tribes. These Native American stories will teach readers the importance of courage, resourcefulness and respect.

Tim Tingle Bio: Tim Tingle is an award-winning author, much sought-after storyteller, and an enrolled member of the Choctaw Nation of Oklahoma. His great-great grandfather, John Carnes, walked the Trail of Tears in 1835, and passed-down memories of this family epic that fueled Tim's early interest in writing and storytelling. His award winning work ranges from award winning picture books like When Turtle Grew Feathers and Crossing Bok Chitto to his collection of Native American stories, Spirits Dark and Light to his YA novels like House of Purple Cedar. Tim has performed as a featured storyteller in festivals and schools across the country, including the National Storytelling Festival and many Native American events. Tingle often accompanies his performances with a Native American flute, plus an assortment of rattles and drums, adding a haunting musical dimension to a concert. His recent performance highlights include a full-length theater piece, "Rolling Way the Rock," based on the story of Choctaw Clarence Carnes, who at age nineteen became the youngest inmate ever sentenced to Alcatraz Federal Prison. Tingle premiered the piece at the International Symposium of Artists of Conscience in Victoria, British Columbia. An avid collector of tribal stories, Tingle has guest-lectured on numerous college campuses on Native American folklore, and earned his Master of Arts degree in the English Department at the University of Oklahoma, focusing on contemporary Indian narratives. He currently teaches an onsite summer storytelling course through the university, "Oral Literature of the Southwest," consisting of morning classes and afternoon guided tours of the pueblos and sites surrounding Santa Fe, New Mexico. Tingle founded the Choctaw Storytelling Festival, an annual event in McAlester, Oklahoma, that gathers Choctaws of all ages for several days of sharing memories and traditions. Tingle is a strong advocate for literacy, and his one-hour keynote address on the importance of reading is among his most moving and often-requested presentations.
or
Not Currently Available for Direct Purchase
Copyright © 2020 American Booksellers Association