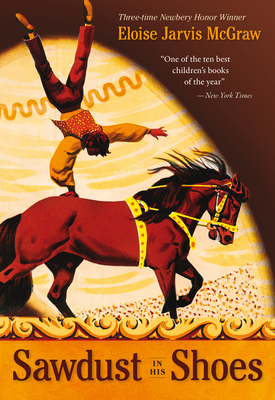 Sawdust in His Shoes (Paperback)

An outsider becomes a hero and a boy becomes a man in this classic coming-of-age tale from the heyday of the three-ring circus, by three-time Newbery Honor Book author Eloise Jarvis McGraw.

Mistrustful at first, Joe grows to love farming and his foster family. Faced with prejudice as an outsider in a closely-knit rural community, he closely guards the secret of his past--until the day his extraordinary acrobatic talent is called for to save a life. Joe earns respect, but there is still circus is in his blood, sawdust in his shoes. Will he ever be happy away from his former life with the greatest show on earth?

The debut novel of three-time Newbery winner Eloise Jarvis McGraw, Sawdust in His Shoes is reminiscent of Ralph Moody's Little Britches and Man of the Family, Roahl Dahl's Danny the Champion of the World, Sid Fleischman's The Whipping Boy, and Walt Morey's Run Far, Run Fast. Rediscover another great read-aloud treasure from the golden age of the children's novel.