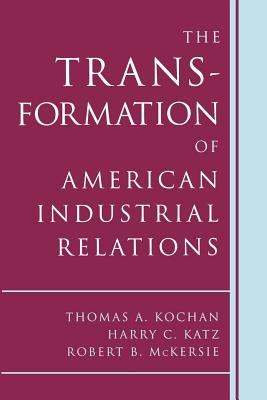 The Transformation of American Industrial Relations

Originally published in 1986, The Transformation of American Industrial Relations became an immediate classic, creating a new conceptual framework for understanding contemporary insutrial relations in the United States. In their introduction to the new edition, the authors assess the evolution of industrial relations and human resource practives, focusing particularly on the policy impoications of recent changes. They discuss the diverse forms of work restructuring in the American economy, the reasons why the diffusion of participatory work reorganization has been so modest, work practices among sophisticated nonunion employers, union membership declines, and public policy debates.

Thomas A. Kochan is the George M. Bunker Professor of Work and Employment Relations at MIT's Sloan School of Management. His previous books include After Lean Production and The Transformation of American Industrial Relations, also from Cornell. Harry C. Katz is Jack Sheinkman Professor and Director of the Scheinman Institute on Conflict Resolution at the ILR School, Cornell University. He is coauthor of The Transformation of American Industrial Relations and Converging Divergences and coeditor of Rekindling the Movement, all from Cornell, among many other books. Robert McKersie is Sloan Fellows Professor of Management Emeritus at the Sloan School.
Loading...
or support indie stores by buying on