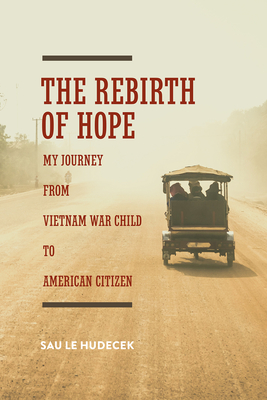 The Rebirth of Hope

My Journey from Vietnam War Child to American Citizen

Born in a demilitarized zone during the Vietnam War to a Vietnamese mother and American soldier, Sau Le arrived in the United States as a young woman with only twenty dollars in her pocket. Though bullied and abused since childhood, she nevertheless came to her new homeland armed with a commitment to build a decent life for herself, her infant son, and her traumatized mother. This is the story of how she overcame every conceivable hurdle—including significant culture shock, a language barrier, serious illness, heartbreak, and betrayal—to become a landlord, successful business owner, joyous wife and mom and a woman blessed with generous, loyal friends. She describes an arduous journey, both literal and figurative, from a place of terror and utter despair to a life she created that’s overflowing with prosperity, patriotism, and love. And ultimately, it’s the story of hope, something Sau thought she’d lost long ago in the minefields of Vietnam. In telling her story, Sau Le aims to uplift those who worry that their dreams cannot be realized. Her goal is also to remind everyone born on American soil that this is the greatest country on earth, and that anything in this land is possible for those willing to put dedication, faith, and passion to work.

SAU LE HUDECEK owns a successful salon in Fort Worth, Texas, while still serving her own elite clientele.  In 1993 she arrived in the United States at the age of 22 and was sworn in as a citizen in 2001. She lives with her family in Granbury enjoying the sunsets from their home on the lake.
Loading...
or
Not Currently Available for Direct Purchase