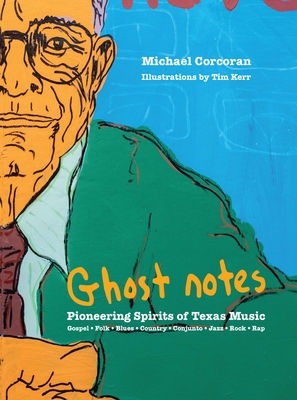 “Ghost notes” is a musical term for sounds barely audible, a wisp lingering around the beat, yet somehow driving the groove. The Texas musicians profiled here, ranging from 1920s gospel performers to the first psychedelic band, are generally not well known, but the impact of their early contributions on popular music is unmistakable. This beautiful Tim Kerr-illustrated collection provides more background on the Texas from which these artists sprang, fully formed. Readers will learn about the black gay couple from Houston who inspired the creation of rock ’n’ roll, as well as the true story of the origin of Western Swing. They will learn about “the first family of Texas music” and the birth of boogie-woogie, the dirt-poor singers and the ballad collectors who saved folk songs during the Depression, and the accordeonista whose musical legacy was never contained on recordings but was passed on by his protégé. The pioneers of modern times include the Dallas rapper who became the wordsmith of gangsta rap, the sheriff’s son from Dumas who produced the signature tunes of Frank Sinatra and Dean Martin, and the blind lounge singer Kenny Rogers called the greatest musician he’s ever known.

MICHAEL CORCORAN has been covering Texas music since 1984, first as an acerbic columnist for the Austin Chronicle, but more recently as a “rock ’n’ roll detective” (The Times of London) whose 2016 book/CD about gospel curiosity Washington Phillips received two Grammy nominations and was praised in the New York Review of Books. His 2012 book/CD on Arizona Dranes was also nominated for a Grammy. He recently moved back to Austin after four years of isolation and small-town exploration.