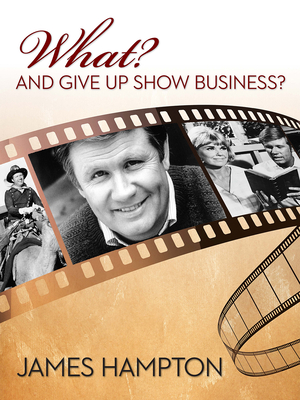 What? And Give Up Show Business?

What? And Give Up Show Business? is the hilarious autobiography of James Hampton, who for over fifty years has been one of the most familiar faces in television and film. A wonderful slice of life in Hollywood told through the personal stories of one of its most prolific actors, this book will appeal to nostalgia buffs, classic film and television aficionados, fans of celebrity autobiographies and biographies, and people who just enjoy a good laugh and great storytelling. This enchanting memoir also includes some of the author’s favorite recipes, which are woven into stories about such show business icons as Doris Day, Clint Eastwood, and Michael J. Fox. Never-before-seen photographs of Hampton and his friends, who happen to be some of the world’s favorite entertainers, pepper this jewel of a tale chronicling life in La-La Land. Everyone who loves classic television and films will enjoy What? And Give Up Show Business?

JAMES HAMPTON has had a long career as an actor, writer, and director that has spanned more than fifty years. Notable roles in movies such as The Longest Yard and Sling Blade, as well as in popular television shows from F Troop to Murder, She Wrote, made James Hampton “That Guy” whose actual name is just on the tip of your tongue. A favorite guest of Johnny Carson, Hampton had over thirty appearances on The Tonight Show. He also worked behind the scenes as a writer, director, and producer on many successful sitcoms such as Evening Shade, Sister Sister, Smart Guy, Boston Common, and Grace Under Fire.