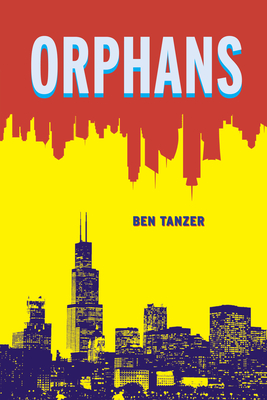 With Orphans, Ben Tanzer continues his ongoing literary survey of the 21st Century male psyche, yet does so with a newfound twist, contemporary themes set in a world that is anything but. In this dystopian tale of a future Chicago, workers are sent off to sell property on Mars to those who can afford to leave, leaving what’s left to those who have little choice but to make do with what’s left behind: burnt out neighborhoods, black helicopters policing the streets, flash mobs, the unemployed in their scruffy suits, robots taking the few jobs that remain, and clones who replace those workers who do find work so that a modicum of family stability can be maintained. It is a story about the impact of work on family. How work warps our best intentions. And how everything we think we know about ourselves looks different during a recession. This idea is writ large in the world of Orphans, where recession is all we know, work is only available to the lucky few, and this lucky few not only need to fear being replaced on the job, but in their homes and beds.It is also a story about drugs, surfing, punk music, lost youth, parenting, sex, pop culture as vernacular, and a conscious intersection of Death of a Salesman or Glengarry Glen Ross with the Martian Chronicles. Looking to the genre of science fiction has allowed Tanzer to produce something new and fresh, expanding both his literary horizons, and the potential market for his work. Tanzer also looks to the story of Bartleby the Scrivener with Orphans, and the question of what are we allowed as workers, and expected to be, or do, when work is fraught with desperation. Ultimately, Orphans is intended to be a contemporary story about manhood and what it means in today’s world, told from the perspective of work and family, and how any of us manage the parameters that family and work produce; but it’s a story told in a futuristic world, where our greatest fears are in fact already realized, because there isn’t enough of anything, and we are all too easily replaced.

"Channeling Orwell and Melville, with a nod to popular American culture, Tanzer (Lucky Man) creates a template for human disaffection and passivity in the face of incomprehensible and omnipotent forces ... this bleak, powerful book is a harrowing cautionary tale about a future that threatens to overwhelm human individuality." -Publishers Weekly

"Patently satirical, Orphans is about the reality of responsibility and the limitations imposed on us in adulthood by a capitalist society. Tanzer's setting and scenario owe much to George Orwell and Philip K. Dick, territory that sf fans might enjoy revisiting." - Booklist

"For a novel involving flash mob protests, martian real estate deals, and robot hand jobs, Orphans is deeply affecting and terribly tender. This is 1984 by way of Tom Perrotta."
- Salvatore Pane, author of Last Call in the City of Bridges

"Orphans is a brilliantly conceived dystopian novel that explores and parses out with wonderful economy the many stranded conflicts of contemporary fathrhood. Tanzer truly possesses a unique writing voice. I don't know of anyone who writes about fatherhood the way Tanzer does."
—Joseph G. Peterson, author of Beautiful Piece, Inside the Whale: A Novel in Verse, and Wanted Elevator Man

Ben Tanzeris a prolific novelist and an Emmy Award-winning public service announcement writer. He lives in Chicago where he lives with his family. Visit him at bentanzer.blogspot.com
Loading...
or support indie stores by buying on