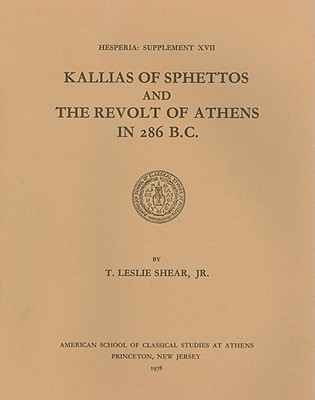 Kallias of Sphettos and the Revolt of Athens in 286 B.C. (Hesperia Supplement #17)

The long honorary decree for Kallias of Sphettos, found in the excavations of the Athenian Agora in 1971, is here published for the first time, illustrated with general and detailed photographs, with a translation and line-by-line commentary. The author has further explored the wealth of information to be gathered from the inscription, which adds greatly to our understanding of Athenian history between the battle of Ipsos in 301 and the battle of Kouroupedion in 286 B.C., the ensuing peace with Demetrios, and the acquisition of foreign aid for the nationalist regime. These discussions are followed by an appendix giving the Greek texts of the literary and epigraphic testimonia, and a chronological table, which provides a historical summary at a glance for this troubled period.

Praise For Kallias of Sphettos and the Revolt of Athens in 286 B.C. (Hesperia Supplement #17)…

"The devotion of an entire Hesperia Supplement to one inscription raises expectations of a document of singular interest, and such expectations are amply justified. For in this volume Shear publishes, with translation and commentary, an Athenian decree of 270/69 honouring Kallias, the hitherto almost unknown brother of Phaidros of Sphettos. The decree casts light upon numerous events in the history of Athens in the early third century B.C., but above all it offers new and detailed evidence concerning the Athenian revolt from Demetrios Poliorketes in the 280s. Thus we learn that Kallias was posted on Andros as a Ptolemaic commander before the revolt and that, when it occurred, he entered Attica with troops to aid the revolutionaries and helped to secure the harvest. He remained for the subsequent siege and, when Ptolemy sent Sostratos to negotiate a peace with Demetrios, he joined him to represent Athens' interests. All of this is new, and Shear rightly devotes the body of his study to a reassessment of the circumstances of the revolt and its aftermath. . . . Shear's study will be an indispensable tool for any serious student of Athens in the early part of the third century B.C." Michael J. Osborne, The Classical Review 30 (1980), pp. 298-299.