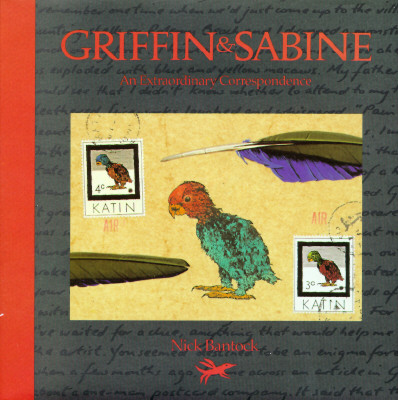 Don't miss The Pharos Gate, the final volume in the Griffin & Sabine story. Published simultaneously with the 25th-anniversary edition of Griffin & Sabine, the book finally shares what happened to the lovers.

Griffin: It's good to get in touch with you at last. Could I have one of your fish postcards? I think you were right—the wine glass has more impact than the cup. –Sabine

But Griffin had never met a woman named Sabine. How did she know him? How did she know his artwork? Who is she? Thus begins the strange and intriguing correspondence of Griffin and Sabine. And since each letter must be pulled from its own envelope, the reader has the delightful, forbidden sensation of reading someone else's mail. Griffin & Sabine is like no other illustrated novel: appealing to the poet and artist in everyone and sure to inspire a renaissance in the fine art of letter-writing, it tells an extraordinary story in an extraordinary way.

Nick Bantock is the author of numerous illustrated novels, including Griffin & Sabine , Sabine's Notebook , The Golden Mean , The Gryphon , and Alexandria , which together spent 100 weeks on the New York Times best-seller list. Born in England, he now lives in Vancouver, British Columbia.
Loading...
or
Not Currently Available for Direct Purchase