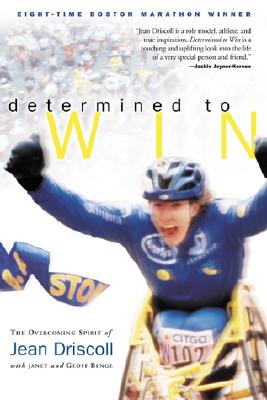 The Overcoming Spirit of Jean Driscoll

Since 1990, Jean Driscoll has been one of the most inspiring leaders in women's sports. Her tenacity for winning at women's wheelchair racing has delivered her into the record books, and her charisma and enthusiasm for life has captured the hearts of audiences worldwide. Best known for her eight victories at the Boston Marathon and her two Olympic silver medals (1992, 1996), Jean has inspired both men and women, athletes and non-athletes, and those with and without physical disabilities. She's been featured on Good Morning America, ABC Nightline, and the Today Show, and twice in USA Today. A documentary highlighting Jean's life story, Against the Wind, has aired on over 400 PBS stations nationwide. In addition to training and racing, Jean serves as a corporate spokesperson for Ocean Spray Cranberries, Inc. As a motivational speaker, she delights in sharing her "Dream Big, Work Hard" message at conventions, corporations, schools, and with the media.

Praise For Determined to Win: The Overcoming Spirit of Jean Driscoll…

"Jean Driscoll is a role model, athlete and true inspiration. Determined to Win is a touching and uplifting look into the life of a very special person and friend."
--Jackie Joyner Kersee, "Female Athlete of the Century,"
six-time Olympic medallist

"Jean is not only determined to win, she's determined to encourage all who cross her path. What a friend. What an inspiration!"
--Joni Eareckson Tada, author and artist

"Determined to Win is a page turner! I was immediately captivated by the external events of Jean's life experiences as well as the poignant strength of her inner person. This book is about so much more than being a winner of eight Boston Marathons. It inspires me to see what a real winner looks like. She looks like...acts like Jean Driscoll.
--Marilyn Meberg, speaker, Women of Faith

"For Jean Driscoll every accomplishment, from the moment of birth to her eighth Boston Marathon trophy was won only after overcoming discouragement, frustration, pain, and disappointment. She is living proof that the only limitations that can keep us down are in our hearts and minds."
--Terry Meeuwsen, co-host, The 700 Club

World class athlete Jean Driscoll is considered the top female wheelchair marathoner in the world and was ranked #25 female athlete of the century by Sports Illustrated for Women, earning the title of "Best Wheelchair Marathoner in History." Jean is an eight-time winner of the Boston Marathon and a two-time Olympic Silver Medalist; she has also medaled nine times in the Paralympics. In addition, she serves on the Fellowship of Christian Athletes State Advisory Board and the Illinois Governor's Council on Health and Fitness. She formerly served as assistant coach of wheelchair track and field at the University of Illinois and today continues to work with younger athletes and coaches.
Loading...
or
Not Currently Available for Direct Purchase