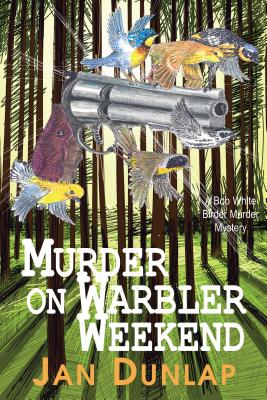 For birder Bob White, May in Minnesota means three things: counseling high school students with spring fever, coaching the girls’ tenth grade softball team and finding every warbler species during spring migration. But when his mother discovers a body in the midst of a morning of birding, disturbing items get added to Bob’s seasonal list: murder, gambling addictions, shady politics, and controversial land deals, not to mention the possibility of wearing an orange jumpsuit while making license plates . . . In this second outing of the Bob White Birder Murder Mystery series, Bob quickly finds himself chasing more than warblers as he searches for a killer who’s even closer to home than he realizes.

Jan Dunlap divides her time between birding, teaching, and writing. While she admits to being nowhere as skilled at birding as her fictional protagonist Bob White, she is an optimist and hopes one day to be able to identify all the birds showing up at her back porch feeders. Her first Bob White Birder Murder Mystery, The Boreal Owl Murder, won a silver medal int he 2008 Midwest Book Awards. She lives in Canyon Lake, Texas, where she is working on her next Bob White book, and she welcomes visitors at her website www.jandunlap.com
or
Not Currently Available for Direct Purchase
Copyright © 2020 American Booksellers Association